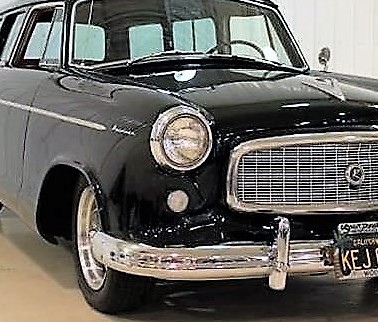 The Rambler American looks glossy and well finished, and comes with a rare engine upgrade

The Pick of the Day is a more unusual car than apparent at first blush. While the 1960 Rambler American wagon has been nicely refurbished, with glossy paint, a redone interior and solid undercarriage, there’s really more to it than that.

The listing on Classic cars.com notes that the Rambler is powered by its original flathead straight-6 engine, a Nash design and usually a demerit for these two-door wagons that are so often hot rodded and customized with V8 power. The dealer’s description merely notes that the “engine runs smoothly and has had some polishing and detail work done.”

But take a close look at the engine photos in the listing and you’ll see something rare and intriguing. The original flat cylinder head and single carburetor have been replaced with a seldom-seen performance upgrade: an aluminum Edmunds aftermarket finned head that allows for twin carbs.

These heads were made specifically for the Nash L-head sixes, which had the single-carb intake molded directly into the top of the head, making it difficult to modify carburetion. One reason these heads are rare is that not too many of them were produced back then since hot rodders were not so interested in six-banger Nashes or Ramblers, which were considered granny cars.

With the modifications and general detailing, the American looks terrific under its hood and would attract envious attention on cruise-in night. The original engine was rated at 90 horsepower, but that should get a boost with a cylinder head that raises compression with increased fuel flow. The engine is hooked up with its standard three-speed manual transmission.

Besides the engine mods, this Rambler is an attractive car that is “much nicer than driver quality,” the Fort Wayne, Indiana, dealer says, with some sporty period-looking wheels setting off the gleam of the black finish. With that look, onlookers might be led to believe the car has been given a big-block transplant, but it’s really more special with the period-correct performance upgrades.

The two-door wagon configuration has plenty of appeal

Plus, the odometer shows just over 55,000 miles, which could explain the car’s apparently rust-free condition.

The Rambler is priced at $21,000, which seems like a modest amount for a fresh-looking wagon with the rare engine mods.

The styling of these wagons once seemed so plump and dorky, but now we appreciate the look, which was derived from the Italian influence of the famous Pininfarina design house.