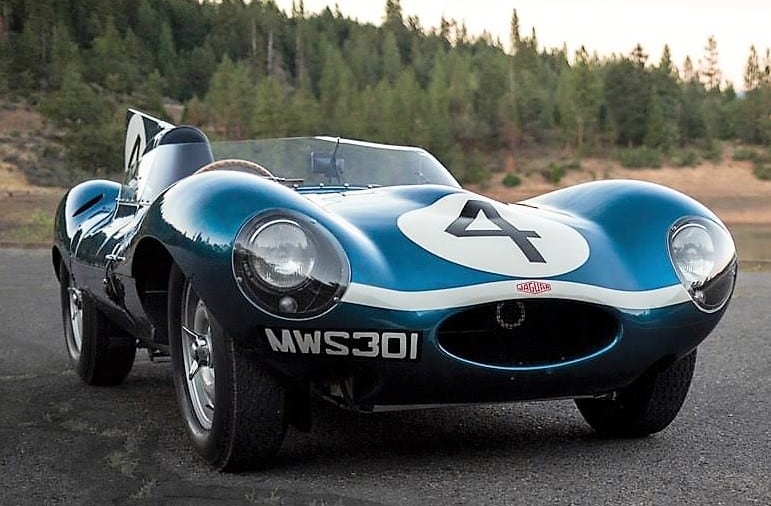 One of the most-storied British racing cars of all time, the Ecurie Ecosse team 1955 Jaguar D-type that took the overall win at Le Mans in the 1956, has been announced by RM Sotheby’s for its Monterey auction August 19-20 during Pebble Beach Concours week.

The iconic Jaguar is the only remaining Le Mans-winning D-type that has survived intact and remains essentially original to its winning form. It is also the first “Customer Series Production” D-Type and the first Jaguar to be designated by its chassis as a D-Type.

Expected to set a record for any Jaguar ever sold at auction, the auction of the D-type, chassis number XKD 501, is a landmark occasion that brings out what is considered by many to be the most beautiful Jaguar ever as well as the most famous race car from the era when the British marque ruled the 24 Hours of Le Mans.

The D-type’s most memorable performance was at the 1956 Le Mans race, where driven by Ninian Sanderson and Ron Flockhart, the streamlined form roared to a comfortable victory with an average speed of 104 mph for more than 2,500 miles.

“XKD 501 is without question one of the world’s most significant competition cars,” Shelby Myers, car specialist for RM Sotheby’s, said in a news release. “It has an incredible racing pedigree, having won the most grueling contest in sports car racing, the famed 24 Hours of Le Mans, and importantly, is without any stories.

“What’s more is its amazing originality, pure in terms of body, chassis and engine, there is no other Le Mans winner from this period that is as original as this car.”

Another important Le Mans contender also will be offered by RM Sotheby’s in Monterey, the 1962 Ferrari 268 SP by Fantuzzi that is one of only six of the sport-prototype racers built and one of just two originally fitted with the 2.6-liter V8 engine.

This Ferrari was driven in competition by a number of notable drivers in period, including Lorenzo Bandini, Ludovico Scarfotti, Pedro Rodriguez, Harry Heuer and Buck Fulp. This car, chassis number 0798, was an integral part of Ferrari’s sports-prototype development and racing campaign, and it would later win the 1964 SCCA D Modified Championship.

Considered one of the most desirable 1960s Ferrari sports-racers in the world, the technically groundbreaking and stylish spider spent 27 years in Pierre Bardinon’s ownership. It was refurbished by designer Fantuzzi to original specifications, and for nearly two decades has been with its current owner, who has displayed the car at major events, including the Goodwood Festival of Speed, Ferrari Days at Spa-Francorchamps, the Cavallino Classic and the Ferrari 60th Anniversary Concours.

“The Ferrari 268 SP is a groundbreaking automobile in every regard,” said Gord Duff, car specialist for the auction company, in the news release. “Not only was it rare to start with, but only five examples remain in existence.

“Its dramatic Fantuzzi spider coachwork represented a complete departure from prior Maranello coachwork and included design cues that became instrumental to seminal Ferrari racers such as the 250 P and 330 P, and even influenced Scaglietti-built berlinettas such as the 250 LM.”

The two exceptional race cars from Italy and Great Britain are part of an increasingly impressive selection to be offered at the RM Sotheby’s auction, which also includes competition Shelby Cobras and Ford Mustangs from the Jim Click collection – among them, the famed “winningest Cobra” – significant cars from the Carroll Shelby Trust, highlighted by the first Cobra ever built, and significant cars from the Riverside International Auto Museum.

For information about the RM Sotheby’s sale in Monterey, visit the auction website.