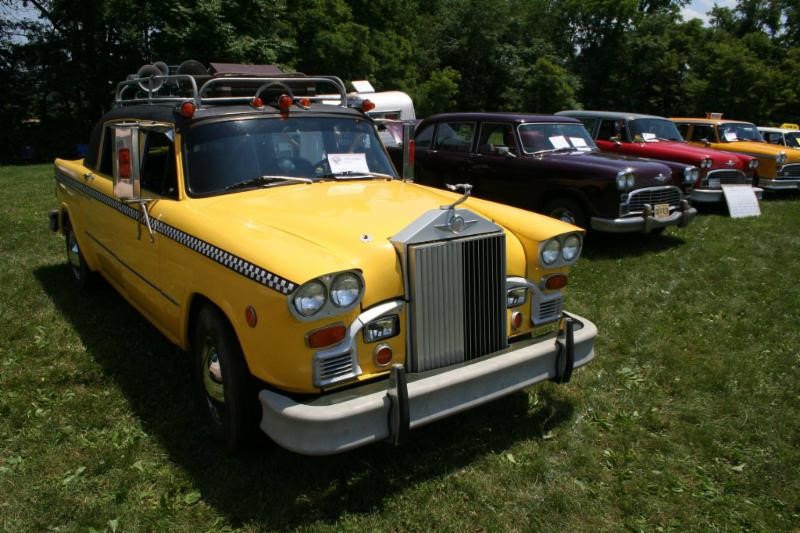 The AACA Museum in Hershey, Pennsylvania, celebrates the seventh annual National Collector Car Appreciation Day today, with car rides in vehicles from the museum’s collection and complimentary ice cream from 11 a.m. to 1 p.m. Each year, the appreciation day is celebrated to raise awareness of the role that automobile restoration and collecting plays in American society.

The Auburn Cord Duesenberg Museum offers discounted admission to those who drive their classic cars to the museum in Auburn, Indiana, on Collector Car Appreciation Day.

The Gilmore Car Museum holds the fifth annual all-German car show at the museum in Hickory Corners, Michigan, on Saturday. The event features such brands as BMW, Audi, Mercedes-Benz, Volkswagen, Porsche and others. The following day, the museum holds its 26th Mad Dogs and Englishmen British Auto Faire, a British car show.

The Seal Cove Auto Museum in Maine holds “Cars and Coffee” on Saturday, from 9 a.m. to noon.

The Owls Head Transportation Museum in Maine holds its annual Hot Rod, Custom & Muscle Car Cruise-in and Antique Aeroplane Show on Saturday and Sunday. Visitor gates open at 9 a.m. and the museum notes that while the theme of the show is custom vehicles, guests arriving in their pre-1996 vehicles of any marque or model will receive free admission at this show and all other museum events.

The AACA Museum hosts the 9th Annual Cadillac and LaSalle Club Meet at the museum in Hershey, Pennsylvania, on July 16 from 11 a.m. to 4 p.m.

The British Motor Museum in England anticipates 600 vehicles composed of light commercial vehicles such as pickups, ice-cream vans, campers, taxi’s, hearses and police cars to show at the museum’s Classic Van & Pickup Show, set for August 7. The museum holds the “Buses Festival” on August 21, set to feature up to 100 restored, vintage and modern buses and coaches.

The California Automobile Museum in Sacramento, hosts “Cruise Fest on Fulton Avenue” on September 10. Cruising runs from 4 to 6 p.m. with the festivities continuing through 8:30 p.m. The event is free and features live music, breweries, vendors, and food trucks.

The 2016 Automotive Hall of Fame Induction & Awards Gala Ceremony is set for July 21 in Detroit, Michigan, and honors inductees Bertha Benz, Roy Lunn, Alan Mulally and Ralph Nader, in addition to Matt Simoncini as Industry Leader of the Year.

The California Automobile Museum offers an inaugural member family movie night on Thursday, July 21. Mater’s Tall Tales is set to be shown in the museums Education Center and Vic’s Ice Cream, popcorn, and lemonade is provided during the movie.

The World of Speed Museum in Wilsonville, Oregon, offers a “simulator race series” with the simulator set in “damage mode,” meaning cars will behave and sustain injury as in real driving. Participants get a practice run and qualifying run July 28, August 25, and September 29 from 5:30 p.m. to 8 p.m. Drivers with top qualifying race times advance to the finals on October 27.

The Seal Cove Auto Museum holds a murder mystery dinner on Sunday, August 7 from 6-9 p.m. The night features a full dinner with cocktails, rides in a classic car, and prizes are slated to be given out to guests who solve the mystery. Tickets can be purchased by contacting the museum.

The AACA Museum opens a new exhibit October 5 during its “Night at the Museum” event, between 6 and 10 p.m., at the museum in Hershey, Pennsylvania. Foods and cocktails are available with a Route 66 flair along with a silent auction, entertainment and automotive artist gallery. Wayne Carini, host of “Chasing Classic Cars,” presents “A Collector Car Conversation” with car collector Ralph Marano and moderated by Bill Warner, founder and chairman of the Amelia Island concours.

This Sunday, the Auburn Cord Duesenberg Automobile Museum, in Auburn, Indiana, is continuing their monthly program, “If These Cars Could Talk.”  This month, guests can view a 1936 Cord 810 Westchester with an in-depth live car-side presentation at noon in the museum.

Shortly after, “E.L. Cord – The man, the myth, the legend” is the topic of discussion July 20 at the museum. Presented by the museum’s curator, Jon Bill, the discussion celebrates E.L. Cord’s 121st birthday along with birthday cake and punch.

On Saturday, the Simeone museum holds a Demo day featuring an aerodynamics theme. Cars to be shown include a 1936 Bugatti Type 57G “Tank”, a 1964 Shelby Daytona Coupe, a 1970 Plymouth Superbird, and a 1970 Porsche 917LH. Frank Moriarty, author of Supercars: The Story of the Dodge Charger Daytona and Plymouth Superbird, will be on hand to discuss and sign copies of his book. The book is an in-depth revelation of the development program of the “wing cars” and their competition history.

On August 6, the museum hosts a discussion as a tribute to Penske Racing with Karl Kainhofer, author Gordon Kirby and other members from the team’s history. Then, August 13, the museum hosts professional race car driver Andy Pilgrim, who is slated to give a talk focusing on his racing experience with Porsche racing cars, highlighting his Championship winning season in 1997 with Allan McNish driving the stunning Porsche 911 GT1

The AACA Museum in Pennsylvania, offers a “Build-A-T” workshop for children eight to 12 years old to build a wood Model T Pickup Truck under the supervision of an educator. The workshop takes place August 6 from 10 a.m. to noon and Registration can be found on the museums website.

Additionally, the museum offers a Model T Driving Experience, open to licensed drivers, that aims to give a hands-on experience of driving a Model T. Classes are July 23, August 13, September 17, and October 22.

The British Motor Museum is celebrating the British car starting July 23 and running through September 4. Various workshops will be held Tuesday and Thursday each week with activities including building British cars with Legos, creating your own card Land Rover, Mini or E-type Jaguar, and creating a car out of balloons.

Bobby Rahal, winner of the 1986 Indy 500 and the first Indy driver to complete the 500 miles in less than three hours, is slated to appear at the Blackhawk Museum on November 12 as part of the museum’s Speaker Series.

The California Automobile Museum in Sacramento, offers ages 8-12, “The Modes of Motion Summer Program.” The Program acts as an educational hands-on summer camp, allowing campers to design and create their own vehicles with lessons, arts and crafts, guest speakers, outdoor activities, experiments, workshops, fieldtrips, and a pinewood racing tournament. The camp runs from Monday to next Friday, 9 a.m. to 3 p.m. each day.

The Auburn Cord Duesenberg Automobile Museum hosts a number of Children’s Activity Days in July. The museums “camp” runs from 10 a.m. to 3 p.m. and immerses campers, ages 10-12, in hands on activities, presentations, and interaction with the museums exhibits. The camps are on Wednesdays, July 13, July 20, and July 27.  The price is $50 per student per day.  This not only includes lunch but also includes something each day that campers will take home to share with family and friends.

Registration is open for the LeMay: America’s Car Museum summer camp.  Children will be able to use the racing simulators and slot car track in the ACM Speed Zone in preparation for a team race on the final day of camp while learning what makes race cars fast, safe, and fuel-efficient through daily challenges. Local race car drivers will also be on hand to showcase their vehicles and equipment used to give tips and advice. The first session is for ages 12-15 and runs July 25-29 from 9 a.m. to 4 p.m. The second session is for ages 8-11 and runs August 8-12 from 9 a.m. to 4 p.m.