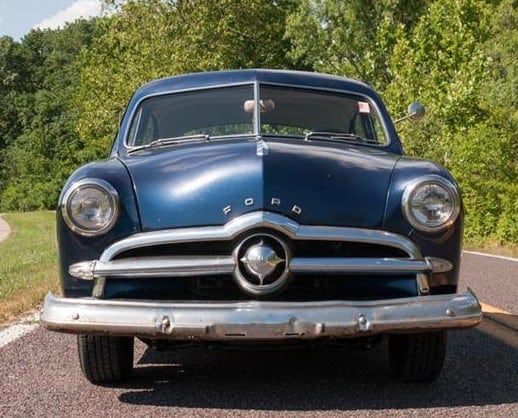 Regardless of personal taste or ownership, classic cars tend to bring back old memories and forgotten times.  When I search for Pick of the Day cars, I usually try to stick with something that combines an ungodly amount of horsepower that you would never use, lots of style, and an obnoxious list of modifications, because those cars remind me of going to car shows with my dad when I was younger.

This week, I went with something that reminds me of those awkward middle-school years.  For me, flashbacks of bad hair, weird clothes and acne were brought on by this particular 1949 Ford Club Coupe. The Pick of the Day, listed on ClassicCars.com by a dealer in St. Louis, Missouri, was owned, maintained, and regularly driven by Green Day’s lead singer, Billie Joe Armstrong.

Long-time punk rockers might remember the American band from their breakthrough years in the mid-90s. But slightly younger millennials, such as me, remember Green Day from the mid-2000s and their iconic song, American Idiot.

This post-war “shoebox Ford,” named for its box-like, pontoon-resembling exterior, is recognized as the model that put Ford ahead of General Motors and Chrysler with the first new models designed after World War II.

According to the dealer, this car features custom dark-blue metallic paint, although “the paint is not perfect.” Shown in the listing photos, the gas-cap door has been removed and patched over. Other imperfections listed by the dealer include windshield wipers that are inoperable, the front bumper showing some pitting and pinpoint rust, and the fuel cell sittiing in the trunk.

The exterior of the car features clear glass throughout and what the listing describes as “two faceted mock sapphires” that “replaced the original taillight reflectors.”

The Ford is powered by a 289 cid Ford V8 with dual exhaust, mated to a three-speed automatic transmission.

Highlights noted by the listing include leopard-print carpet, and that “each door has a 6×9 stereo speaker mounted in it, connected to a JVC AM/FM stereo with CD player and a removable faceplate.”

An aftermarket tachometer resides in the clock mount and a set of gauges are mounted beneath the dashboard, replacing the originals. The listing adds that the steering wheel is original, but the center cap is showing its age.

Current mileage on the odometer shows 77,238 miles, but the dealer adds the car is sold as is with a mileage-exempt California title in Billie Joe Armstrong’s name. The dealer notes that the car comes with a letter of authenticity plus something special for Green Day fans, a guitar autographed by Billie Joe Armstrong.