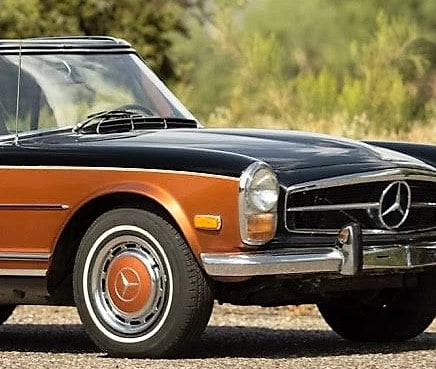 Two classic roadsters originally owned by legendary female stars of stage and screen will be auctioned in August by Bonhams during its Quail Lodge sale in Carmel, California, during Pebble Beach Concours week.

The stars are Motown icon Diana Ross and Hollywood siren Jane Russell. The cars are a 1967 Jaguar E-type roadster sold new to Ross and a 1969 Mercedes-Benz 280 SL that Russell purchased new and used sparingly near her Santa Barbara, California, home.

Diana Ross’s Jaguar is said to have been fully restored

Ross acquired the Jaguar from Jaguar Cars of New York and registered it under her name in Detroit in October 1967. Now fully restored to original configuration in Opalescent Golden Sand over black interior with black fabric roof, the XK-E is fully documented and certified by Jaguar Heritage, according to the auction company.

Considered one the greatest American musical celebrities, Ross counts among her many honors Billboard’s Female Entertainer of the Century, numerous Grammy awards and induction into the Grammy Hall of Fame, the Rock & Roll Hall of Fame and the Soul Train Hall of Fame, and recipient of a Hollywood Walk of Fame star.

The Jaguar is the car that she longed for, she told her friends, and finally was able to claim when she achieved financial success.

Jane Russell was one of the world’s most beautiful and desirable film stars, yet she also was down to earth and unpretentious, according to her son, who consigned the Mercedes 280 SL for auction. The car perfectly matched her personality, he said: sporty and fun but neither ostentatious nor flamboyant.

The Mercedes was custom painted to reflect the taste of its owner, film star Jane Russell

The Mercedes’ custom two-tone paint job also reflects her interest in style and design. Upon purchase, she had the car resprayed in its current black-and-copper motif. Many illustrious people rode in the passenger seat of the Benz, her son said, including such personal friends as Bob Hope, Nat King Cole, Robert Mitchum and Charlton Heston.

The personalized California license plate, WAIF 1, reveals another of Russell’s passions, referring to the World Adoption International Fund she founded after her adoption of three children. WAIF pioneered adoptions of foreign-born children by Americans, set federal standards that are adhered to today, and resulted in the adoption of nearly 40,000 children.

The two celebrity cars are among the selection at auction, including such classics as a 1931 Bugatti Type 51 Grand Prix and a 1935 Mercedes-Benz 500K Cabriolet A, that will be offered August 19 at the Quail Lodge sale. For information, visit the auction website.