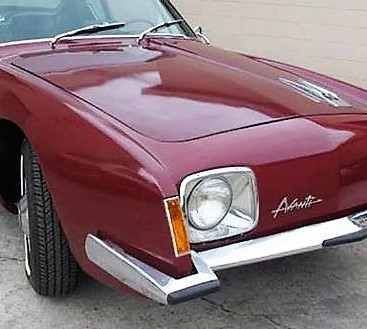 The 1960s were a tough time for the smaller American auto manufacturers. The Big 3 had all but cornered the market in just about every category, leaving such companies as AMC and Studebaker to basically pick up the scraps with low-cost economy cars. Studebaker did not see much growth potential in this and despite an ever-shrinking bank account, decided to create a halo car in the form of a top-tier personal-luxury/GT coupe, the Studebaker Avanti, which debuted in 1963.

Despite brilliant engineering, vast color options and a striking design by Raymond Lowey and his team, Avanti did not save Studebaker, and a few years later, the company closed its doors. But Avanti survived as a standalone brand, built in fits and starts by a number of ambitious manufacturers, up until a few years ago.

The Pick of the Day is one of the original run, a 1964 Studebaker Avanti in glossy burgundy, powered by a 289 cid V8, automatic transmission, power steering and brakes, and air conditioning.

The Orlando, Florida, car dealer listing the Avanti on ClassicCars.com offers scant information about the car, but the pictures tell a better story and show what looks to be a clean and correct example, with a decent paint job and a well-restored or preserved interior. The main issue to look for in these cars is chassis rust; the fiberglass body won’t rust but the frame will.

From behind the wheel, the Avanti is pure jet-age American GT, with aviation-inspired controls and layout and full instrumentation, as well as comfortable seats. The performance is strong with the 289 and more than able to keep up with modern traffic. The ride and steering are also above par, and the Avanti is as nice an example of a personal luxury/GT as the Buick Riviera of the same era, although it is more distinctive-looking than the Riv.

For years, the Avanti was a bit of an unloved ugly duckling despite its fascinating history and celebrity styling. As a result, nice Avantis rarely sold for more than $20,000. In the past few years, people seemed to wake up to the fact that the Avanti is an important collector car with good performance and creature comforts, and unique retro futurist styling. As a result, prices are on the rise.

The asking price of $29,900 seems to be market correct for this apparently solid example. Avantis are unlikely ever to become big-dollar cars, but they always will appeal to those who want something a little bit different from a lost American brand.