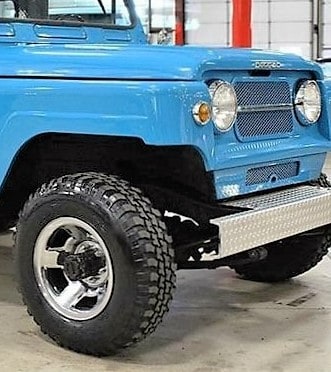 The Nissan Patrol is not well known in the U.S., although it is a mainstay off-roader in South Pacific locales, including Australia and New Zealand, where it has competed for decades against the Toyota Land Cruiser, Land Rover and Jeep. These are cool and capable four wheelers, but among collectors, all the attention for vintage Japanese SUVs has been sucked up by Toyota Land Cruiser.

The Pick of the Day is a relatively rare 1967 Nissan Patrol K60 4X4 in what looks to be in terrific condition, ready to romp off on its next back-country adventure. This is the perky-looking second-generation Patrol, and the fresh-looking Azure Blue paint job seems just right.

“This … is one of the cleanest examples we have seen,” the Kentwood, Michigan, dealer says in the listing on ClassicCars.com. “These are usually tattered and needing everything.

“This nicely restored example before you is (the) K60 version with the factory hard top. Inside it was restored with grey Rhino lining with diamond-plate accent and fully reconditioned seating. New chrome wheels with new 30-inch tires, this Patrol has a look like no other.”

The Patrol is powered by a 4.0-liter inline-6 that produces 145 horsepower, which should be plenty of power for pushing through the boonies. The transmission is a column-shifted three speed manual, which might seem funky for those more-accustomed to floor-mounted four speeds.

The factory setup could limit highway speeds, depending on the gear ratios and final drive. You would expect that the Patrol would be geared for working hard in four-wheel drive at moderate speeds, not cruising the freeway.

While restored Toyota Land Cruisers are selling for serious money at auction, this nice Nissan has an asking price of just $16,900. That seems like a smoking deal for such a distinctive little SUV that could open up a world of four-wheeling expeditions.