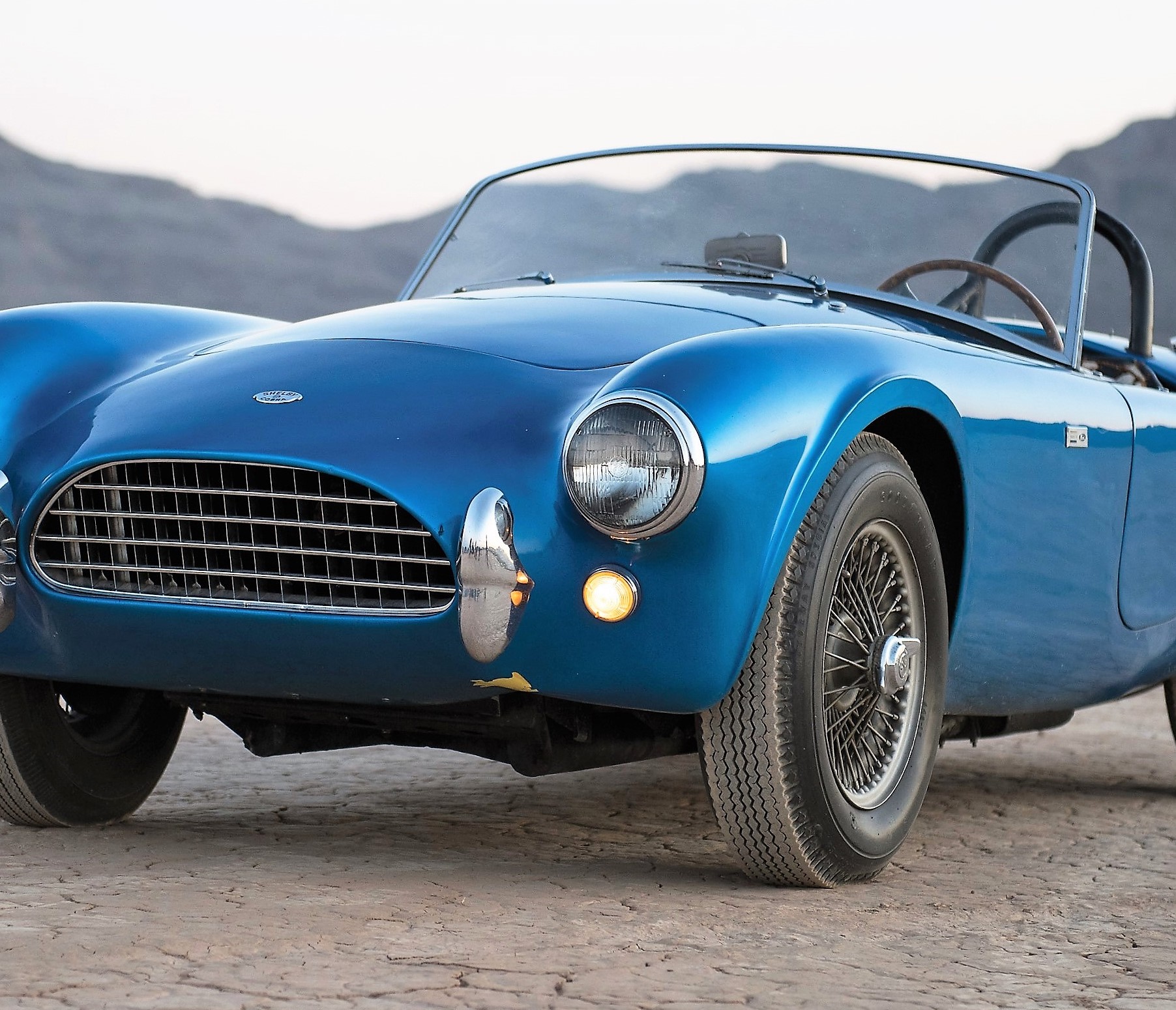 In February 1962, road racer Carroll Shelby and famed hot rodder Dean Moon pulled an all-nighter at Moon’s shop in Santa Fe Springs, California, along with Moon’s crew of expert mechanics. In the morning, they rolled out into the sunlight a sleek roadster that would have a monumental impact on the worlds of sports cars and motorsports.

Melding the graceful body and archaic chassis of a British AC Ace with the drivetrain of a Ford performance V8, the first Shelby Cobra started up and roared into history. That car, bearing chassis number CSX2000, would introduce Carroll Shelby and his remarkable Cobra concept at the New York Auto Show, serve as the original road-test car for automotive journalists (famously repainted six times so Shelby could feign having built more than one) and would remain in Shelby’s possession throughout his lifetime.

The Cobra was used for road tests by journalists

RM Sotheby’s announced Wednesday that CSX2000 will be offered for sale for the first time in its 54-year history at the company’s Monterey, California, auction held August 19-20 during Pebble Beach Concours week.

Now painted a bright metallic blue, the seminal Cobra, with its incomparable history of launching Shelby’s career and legacy, could be the most valuable American car ever to come up for sale. Other than the exterior finish, the lithe roadster is as it was built, the worn and tattered seat upholstery bearing testimony to Shelby’s orders that the car by kept untouched.

The Cobra is being offered by the Carroll Hall Shelby Trust, which also has consigned some other pieces of Shelby’s performance history. Another pair of Cobras from the late Shelby’s extraordinary life will be offered at the sale by the Carroll Shelby Foundation.

The auction of Shelby Cobra No. 1 is a historic moment in itself, said Shelby Myers, car specialist for RM Sotheby’s and son of auction founder Rob Myers.

The  Cobra is being offered for sale for the first time

“When it comes to American sports cars, CSX 2000 is without peers. Its historical significance and impact on the global sports car scene cannot be overstated,” Myers said in a news release.

“In the automotive world, CSX 2000 was the shot heard ‘round the world; it revolutionized not only American racing, but the greater auto industry as a whole.

“Had Carroll Shelby never decided to squeeze that high-performance V8 into its engine bay, there would be no Cobra and certainly no Shelby American, nor GT40, nor the others that followed. The automotive landscape and sports cars as we know them would be very different.”

The Cobra came about after then-Ford president Lee Iacocca approached Shelby about creating a sports car to compete in motorsports against Chevrolet Corvette, which had been ruling the road-racing circuits. Quickly developing such a racer from the ground up was prohibitively expensive and Iacocca wanted to see if the innovative Shelby could come up with a plan.

Shelby soon worked out a deal with AC Motors in the U.K., the makers of small, stylish roadsters and sports coupes, to provide the body and chassis of its Ace sports car, into which Shelby wedged one of Ford’s new and spirited 260 cid V8 engines. Shelby said the name Cobra came to him in a dream.

The result was a car that seemed like it had been born with that brawny engine. It propelled the lightweight car from zero to 60 in just over four seconds, according to magazine road tests. The Cobra also was found to be balanced and handled well, and fulfilled Shelby’s promise to “put Corvette in the weeds.”

Shelby built a first run of 100 Cobras to homologate the car for racing, and they were soon running away from the heavier Corvettes. Cobras won U.S. Road Racing Championships in 1963 and 1964. Shelby eventually built 75 of the 260 cid Cobras, 580 Cobras with the later 289 V8 and 348 of the iconic 427 Cobras, which is the most replicated car in history.

RM Sotheby’s says that its Monterey auction will serve as a celebration of Shelby Cobra with a number of others on the docket. Among them are two race-bred Cobras from the collection of Tucson, Arizona, Ford dealer and vintage racer Jim Click, who also is auctioning a valuable 1966 Ford GT40 Series 1 race car, a 1965 Shelby Mustang GT350 and a pair of famous Mustang race cars.

The car has its original tattered seat upholstery

One of those Cobras, CSX2473, is known as “the winningest Cobra” because of its remarkable record of race victories accumulated with sports car racer Don Roberts behind the wheel.

CSX2000, the one-and-only original Cobra, should headline the Monterey auction by a long shot, and who knows how high the bidding might rise on this singular piece of U.S. history. An eight-figure result could be in the offing.

“It is, without exception, the single most important and history-rewriting sports car ever offered at auction, after over 50 years of ownership and without ever leaving the care of its founding father,” Shelby Myers said. “Supremely original and with extraordinary history, we’re beyond thrilled to celebrate and present this national treasure in Monterey this August.”

For information about the RM Sotheby’s sale in Monterey, visit the auction website.