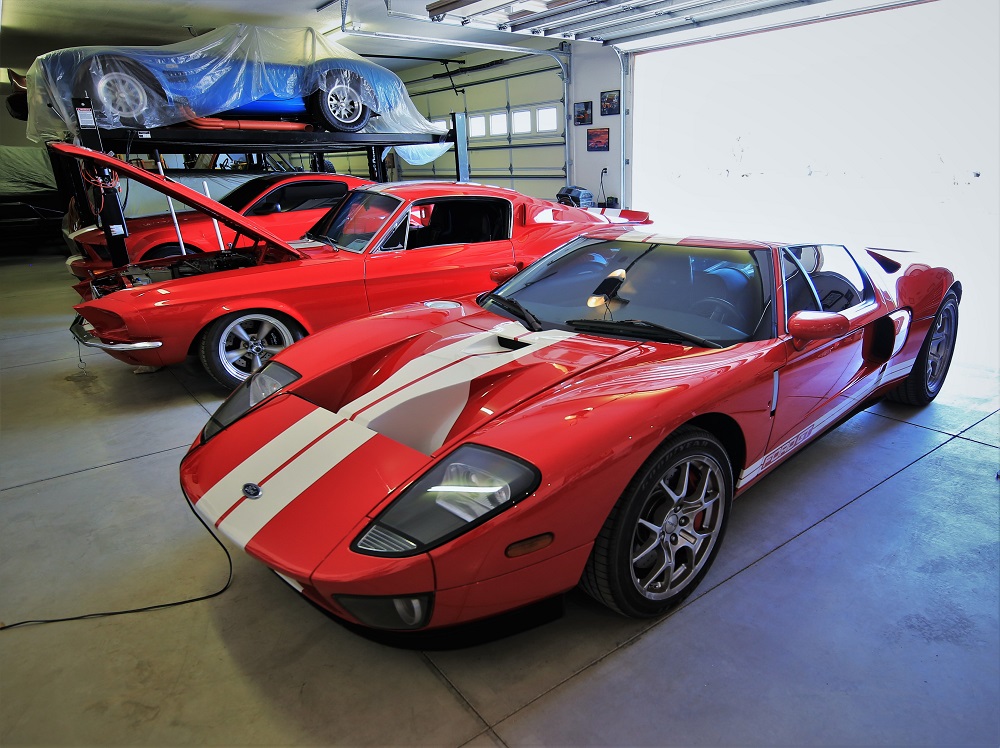 Welcome to Chazland: a world made of pure imagination housing creations that defy explanation. This is an escape to a personal paradise.

From the outside, this oasis looks like a normal garage in Arizona. But for Chaz Lightner, it’s where he finds his soul revived after being bogged down by everyday, mundane tasks, a place where his creative abilities are set free.

“I lock myself in the garage and build things,” Lightner said. “I could pay a psychologist but, you know, the money I save there I just put into a car. Its therapy.”

Currently under construction in Chazland is the latest product of Lightner’s imagination, a 1985 Ferrari 508 GTO.

The Ferrari retains its serial numbers indicating it began its life as a 308 GTB but has been modified to retain a 5.0-liter twin-turbocharged Ford V8 while the body has been fitted with a faux GTO body.

“It’s kind of different, it’s different but cool,” Lightner said, adding that other modifications to the Ferrari include a steering rack from a 1993 Mustang, Hydroboost brakes from a Ford F-350, air-conditioning from Vintage Air, and the dashboard is out of a Ferrari 360.

“It’s got 360 upper and lower control arms in the rear, custom in the front, and all the hubs, spindles, and brakes are all factory Ferrari 360.”

The fiberglass GTO body was created by Jim Carpenter’s Italian Design and Racing, which Lightner says creates bodies that are “as close to original as humanly possible. He also fixed all the problems Ferrari had with the originals, like the cracking in the different places.”

Lightner said when the car came to him, he couldn’t afford an original Ferrari engine. “With the engine, turbos, transmission, headers, and all that I was looking at $190,000 to $200,000. It was too much.”

As a result, everything is custom done; the only original components are doors and roof and some of the frame.

Setting his imagination free, “I make it up as I go along” Lightner said, adding “nothing is interchangeable between Ferrari and Ford.”

“I thought the turbos would be hardest to fit but I had called Hellion Power Systems out of Albuquerque I told them what I was doing and they were like ‘there is not many things that we make for a kit, so basically your calling to pick our brain.’ They agreed to help and told me the size of the turbos I needed to fit. Custom made turbos were built, which should be overkill for this motor.”

Under the hood of Lightners first car, a 1966 Ford Bronco with 4BT Cummins diesel with a single turbo

While the car sits on a lift in Chazland, Lightner has taken it out on a trailer for several occasions, such as Monterey Car Week, only to be turned away from the concours. “If it is a real Ferrari person, they don’t want anything to do with me,” he said. “They can’t stand me.”

On the other hand, “I went to (Phoenix-area dealership) Sanderson Ford because they had a Mustang car show and considering it has a Ford engine in it, I thought I’d go over there and see how they liked it, and they loved it. They flipped. They literally helped me pull it off the trailer and had 10 guys pitching in, who couldn’t be nice enough. I was thrilled about that.”

Along with the Ferrari, Lightner is working on a Fox-body Mustang race car he wants to use for competition in the Super Street series. Powering the Mustang is a common-rail diesel engine rated at 800 horsepower.

While the Chazland garage provides Lightener with a space to work on his projects, across the property is another garage where completed projects are kept. Among them is his first car, a 1966 Ford Bronco that he obtained when he was 16 years old.

The current engine is a 4BT Cummins diesel with a single turbo. In addition to being his first car the Bronco was also the first of many. Lighner had done 18 other Broncos, all of them 1966 models.

“I really liked the body lines of the Galaxies and I wanted to build a 1964. This car came about on August 10, 1964, its one of the last and its four days older then I am.

“It’s absolutely crazy.” Lightner said. “Just sitting, it won’t hardly move because it doesn’t get any boost unless you load the engine. At 60 miles an hour on the highway you can mash on the gas pedal and the car will downshift, boost shoots up to 80 pounds and the tires blow loose.”

According to Lightner such an event occurred recently on an outing to Cars and Coffee, which sheered the wheels lugs.

Interior of the 1967 Shelby Mustang

Lightner says engine fitment took about two and a half years and the wiring alone was a three-month project. Other modifications to the Galaxie include air suspension from Airtech, turbos from Turbo Diesel, the front seats are from a Cadillac CTS. The backseat is original to the car.

And then there’s his 1967 Shelby Mustang.

“Literally everything you can think of has been done to this car,” Lightner said. “The car has a full roll cage that goes all the way out the front, back, and in trunk.” Powering the Mustang is a bored and stroked Cobra engine rated with 566 rear-wheel horsepower and mated to a 6-speed Cobra transmission. Modifications include Stage 5 ported heads, GT cams, and a Sege Meyer blower. “Everything in the car is Ford. I didn’t mix any off-brands or makes.”

To mirror the 1967 Shelby Mustang, Lightner has a 2007 Shelby Mustang he says is “bone stock with 900 miles on it. The only thing I have added was charger cable for battery.”

“I come up with some of the ideas for builds based off what I see on eBbay” Lightner said, adding “the turbine was inexpensive, I hooked up to a transmission and it runs. I was going to find something to put it in and then thought to myself, ‘self, everyone has a turbine in a vehicle — I could think of 50 other cars. I wanted something different, and that is why I am building a turbine electric Bronco with parts from a (Toyota) Yaris.

While searching eBay, Lightner looks for cars with clean bodies or “something cool,” which is how he ended up with a Pontiac Trans Am that had had been Castrol’s project car and with his 2005 Ford GT.

“The Trans Am literally ran on the dyno for 10 years because Castrol used it for testing,” he said. “It has 75,000 miles on it and has only ever been registered for a year and a half. When Castrol was done with it, they put aluminum foil on all the windows so the interior is absolutely perfect. I have plan to drop in a twin turbo LS7.”

The Ford GT has a salvage title and was used as one of Fords “picture cars” for marketing materials, including a 2005 Super Bowl commercial, Lightner said.

“I learned the car had been so beat at the track for the commercial that the car went into limp mode, and on these cars limp mode restricts the speed to 40 miles per hour and it won’t rev higher than 2,500. The director had parked the car at home, which was then broken into in search of the keys. They stole the car, and it didn’t go very fast, so they parked it in a backyard with plans to part it out.

“The DEA found the car shortly after but insurance had already paid, so instead of it going back to Ford, all-state put it up for sale.”