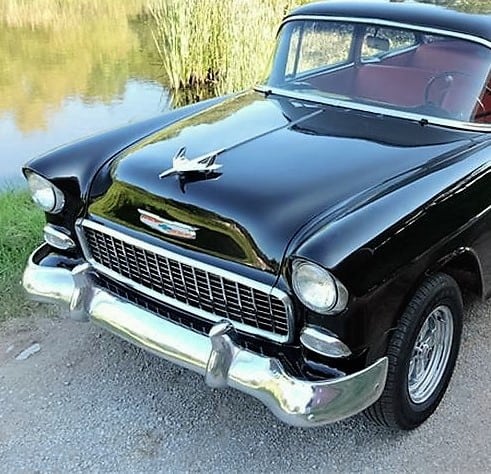 Chevys from the ’50s are most appreciated in lavish hardtop form, with all the chrome embellishments intact. But when it comes to the 1955-57 so-called “tri-5” cars, I favor the unadorned two-door sedans with the traditional door-frame design that creates a thick B pillar post. Thus the nickname: two-door post.

These models make great-looking street rods or resto mods, such as the Pick of the Day, a 1955 Chevrolet 150 two-door post that has been reworked in a very correct fashion. Other than the period-looking custom wheels, this two-door post looks fairly stock, simple and clean with what appears to be a beautifully glossy black paint job set off by a bright-red stock interior. Classic.

Under the hood is a classic custom feature, a 327 cid V8 from the 1960s hooked up to a four-speed automatic transmission. The Lone Grove, Oklahoma, car dealer listing the Chevy on ClassicCars.com describes it as a nice-driving car with apparently 88,000 original miles, which is represented as the true mileage.

The car has a typical back story for Chevys of this period. According to the seller, the Chevy spent its life in the small towns of Oklahoma just south of Oklahoma City, where it survived in decent condition.

“Bought new by a school teacher, the second owner was the football coach from Rush Springs (Oklahoma), who stored the car for 25 years,” the seller says in the ad. “The third and current owner has done the current restoration.”

This car has all-original parts and panels, and the restoration was done on a rust-free body, the seller says, adding, “Solid southern Oklahoma car. Original floors and trunk pan, no rust underneath. The original front and rear bumpers are nice and fit great.’

The paint and interior are factory correct, the listing notes, with the original seats reupholstered, along with fresh door cards and inner rear panels. The car is not a show queen, the seller adds, but “a nice driver-quality tri-5 Chev.”

From the photos, the Chevy’s suspension looks high in the front, and I would want to get that lowered a bit. Other than that, it seems good to go.

Highly sought after by collectors and hobbyists, 1955 Chevys are generally pricey, with this one commanding an asking price of $39,900. Still, you’d probably spend more with plenty of sweat equity invested to bring a lesser one up to this level.