The 1907 Thomas Flyer that won the 22,000-mile New York to Paris event in 1908 is the latest vehicle to join the National Historic Vehicle Register, the Historic Vehicle Association announced Thursday.

“The 1908 New York to Paris race was a daunting challenge given the lack of road infrastructure and state of automobile technology of the period,” Mark Gessler, HVA president, said in a news release in conjunction with the official ceremonies honoring the Thomas Flyer during The Great Race. 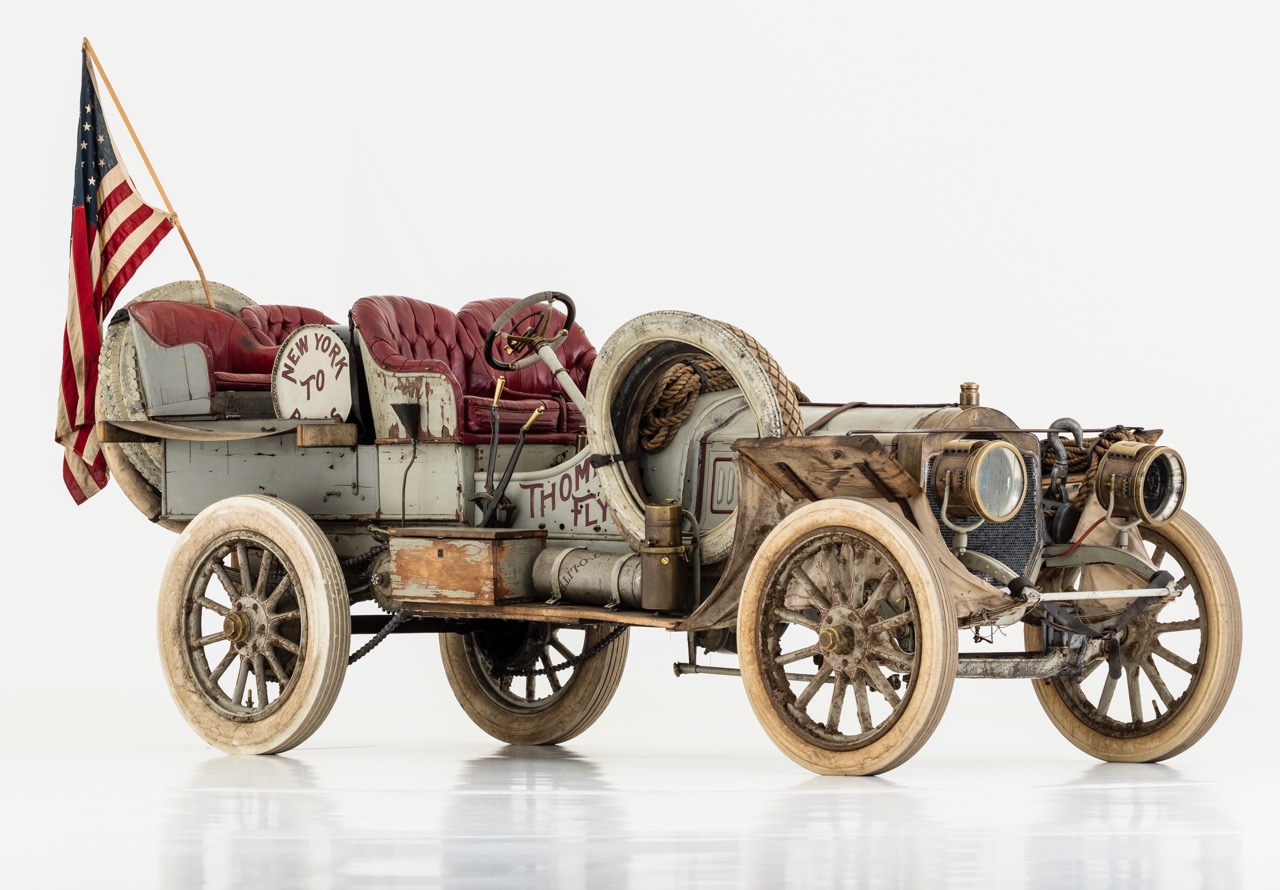 “Only three of the six competitors completed the course, traveling more than 22,000 miles over 169 days and encountering extremely difficult conditions,” Gessler continued of the race, which began on New York City’s Broadway and ended on the Champs de Elysees in Paris. “The 1907 Thomas Flyer beat the nearest rival by 26 days. Its victory made a profound impact on the fledgling American automobile industry and brought world-recognition to our country.”

The Thomas Flyer is owned by the National Automobile Museum (nee The Harrah Collection) in Reno, Nevada. The HVA reported that the car was in very poor condition when it was obtained from pioneering car collector Henry Austin Clark Jr., in 1964 by hotel and casino magnate Bill Harrah. The car was authenticated for Harrah by 91-year-old George Schuster, who had driven the car on the New York to Paris event.

“During the dismantling of the Flyer, Schuster witnessed cracks in the frame and repairs he had made during the race, proving its authenticity,” the HVA reported.

The car was restored and “aged” to the condition in which it appeared upon reaching Paris at the end of the race.

“Harrah’s team worked with Disney and other experts to ensure the seats, the paint, and all of the finishes had just the right look,” the HVA said. “Today the car remains in this condition, even adorned with mud on the wheels and tires for added effect.

Jackie Frady, president and executive director of the National Automobile Museum noted that,”The 1907 Thomas Flyer was certainly a road-worthy warrior.  Just three days before the 1908 New York to Paris Race, it was pulled off the floor of the E.R. Thomas Company’s showroom. After 169 days of fierce competition, the Thomas Flyer claimed victory and earned its place in history.

“It dramatically increased the prestige of American-made automobiles and proved that automobiles could be a year-round mode of transportation and a means of long-distance travel.”
Technically a 19078 Thomas Flyer Model 35, the car was produced by the E.R. Thomas Motor Company of Buffalo, New York. It’s four-cylinder engine displaced 571.3 cubic inches and pumped out 60 horsepower. The car rides on a 118-inch wheelbase and weighs some 3,200 pounds.

Cars admitted to the national register must pass extensive measurement and documentation using the Secretary of the Interior’s Standards for Heritage Documentation and the Historic American Engineering Record. Once complete, that material permanently resides in the Library of Congress.

Previously listed on the register are: