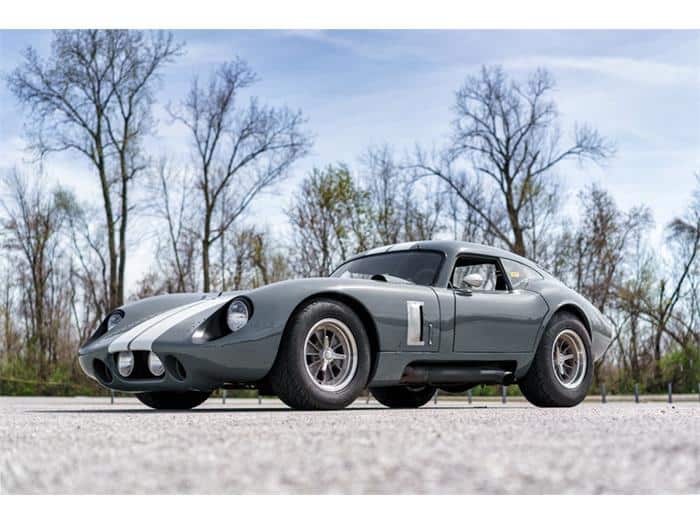 Marking the 50th anniversary of Ford GT40’s 1-2-3 sweep over Ferrari in the 1966 24 Hours of Le Mans, Ford returned to the iconic race this year with the new Ford GT, which won the GTE Pro racing class after earning the pole position during qualifying. It’s hard not to feel some kind of nostalgia as we recognize this significant moment, and in my case, sparking an interest in the past.

I’ve always had a thing for the Shelby Daytona.  I mean let’s be honest, it’s gorgeous. But I never really took the time to learn more about it until recently, when I learned it had won the GT class at Le Mans in 1965 and went on to win the FIA World Sportscar Championship that same year, making Carroll Shelby – who was part of the driving team that won Le Mans in 1959 – the first American constructor to win the honor.

Between 1964 and 1965, prior to Shelby getting reassigned to work on the Ford GT40 project, six Daytona Coupes were built. Because of their limited numbers, proportionate lines, performance and pedigree, as well as their seven-figure values, it’s no surprise that many replica Daytonas have been developed and produced, including the Pick of the Day, a 1964 Shelby Daytona Coupe replica offered on ClassicCars.com by a dealer in Missouri.

The car was built in 2004, the seller says, and features a chassis by Shaun King of Wisconsin and coachwork by Bob Schumacher of Omaha, Nebraska. It was purchased in 2007 by Dan Rose and has since been dubbed the “Dan Rose Special,” with a subtle redesign that has documented approval from Peter Brock, the designer of the Daytona who worked with Shelby to create the original six cars.

The redesign performed by Rose included alterations to the nose and hood, lowering the top of the windshield, extending the quarter windows past the B-pillar, eliminating the spoiler, adding custom Trigo Halibrand replica wheels, and completing the build with slightly different custom-made Hushpower exhaust.

According to the listing, the Daytona is powered by a 427 small block V8 that has been fitted with a four-barrel carburetor, aluminum intake and heads, in addition to an aluminum radiator, water pump and fuel cell. The engine is mated to a 5-speed manual transmission, Ford 9-inch Detroit Locker rear end with 3.70 gears.

The interior was completed with M&R three-point harnesses connected to a cage, aluminum seats covered with leather, and a dash with Stewart-Warner gauges.

Showing 2,300 miles, the Daytona Coupe is offered for $79,995. The seller notes the car comes with all receipts and documentation of the build.