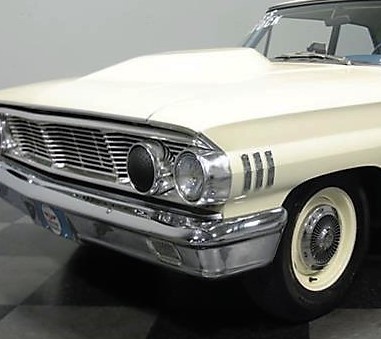 Largely forgotten these days are some of the early kings of muscle-car performance, full-size Fords with monster 427 big-block power with the factory designations of Q-code and R-code. For 1964, Q-code 427s produced an advertised 410 horsepower while the more track-oriented R-code cars were pegged at 425 horsepower.

Ford had largely switched its drag-racing program to the smaller, lighter Fairlanes by this time, most notably the famed Thunderbolts, but there was still interest by consumers in going large.

The Pick of the Day is a 1964 Ford Custom two-door sedan that the Lithia Springs, Georgia, dealer advertising the car calls a “full-size hammer.” This stripped-down Ford with the bulbous bulge on its hood is largely period-original aside from some drivability improvements, the dealer says.

“Stuffed full of Ford’s nastiest 427 and fitted with a bunch of upgrades to make it easy to drive today, it’s got an industrial-strength look that still resonates today,” the listing says.

The dealer’s excellent description in the ClassicCars.com ad says it all, so I’ll just let him take it from here.

“The Custom was the bottom-of-the-line, so it was already no frills, but the smartest guys spec’d a 427 (known as a Q-code) and little else,” the description reads. “Most were Wimbledon White, partly because that’s how Ford painted them when they went racing and partly because it was the most visible background for sponsorship decals at the drag strip. Regardless, that’s how this car was originally born, and it cackles and snarls just as you’d expect.

“The long bodywork is straight and clean, and while the paint isn’t show-quality, it has a bare-knuckles look that’s still intimidating. Somewhere along the line this one grew a teardrop hood like the Thunderbolts (which were one-size smaller, on the Fairlane platform) and the center headlights were converted to air intakes, both modifications that probably could have happened when it was fairly new.

“Panel gaps are good and it doesn’t look like this car was actually used for racing. Even the chrome shines up nicely and gives the Custom a bit of an upscale look, just for fun.

“The blue-vinyl interior is bargain basement, but that’s purely intentional. Bench seats, a manual shifter sticking out of the transmission tunnel, and a tach stuck to the top of the dash make it seem very much like 1964 all over again. You’ll note this car has both clock and radio delete, and there’s a heater only because it was standard equipment.”

“Dual quads are always impressive, but this one runs very well and they don’t get at all fussy, although you’d better be sure it’s aimed where you want it to go before you crack open the secondaries,” the dealer advises. “With less than 500 miles on the build, it’s very fresh and hasn’t been raced, so no worries about getting someone else’s tired, yet expensive, hi-po motor.

“A Ford 9-inch out back doesn’t seem to mind the torque ripping through it and it sits right, especially on those skinny 215/75/15 blackwalls that emulate the original bias-plies that it might have worn originally.”

The critical upgrade for this big performance ride is a more-modern five-speed manual transmission that “transforms the big block into something that can be easily used on the street.” The original Toploader four-speed is also available if a buyer is aiming for originality.

This rare piece of early ’60s muscle-car thunder doesn’t come cheap, with the asking price set at $52,995. But at that, the next owner will be getting a rare piece of Ford history that has not been tampered with to any great degree.

“Most folks won’t get this car, but if you’re one of those Ford guys who love the early muscle, this car hits all the right notes,” the dealer adds.