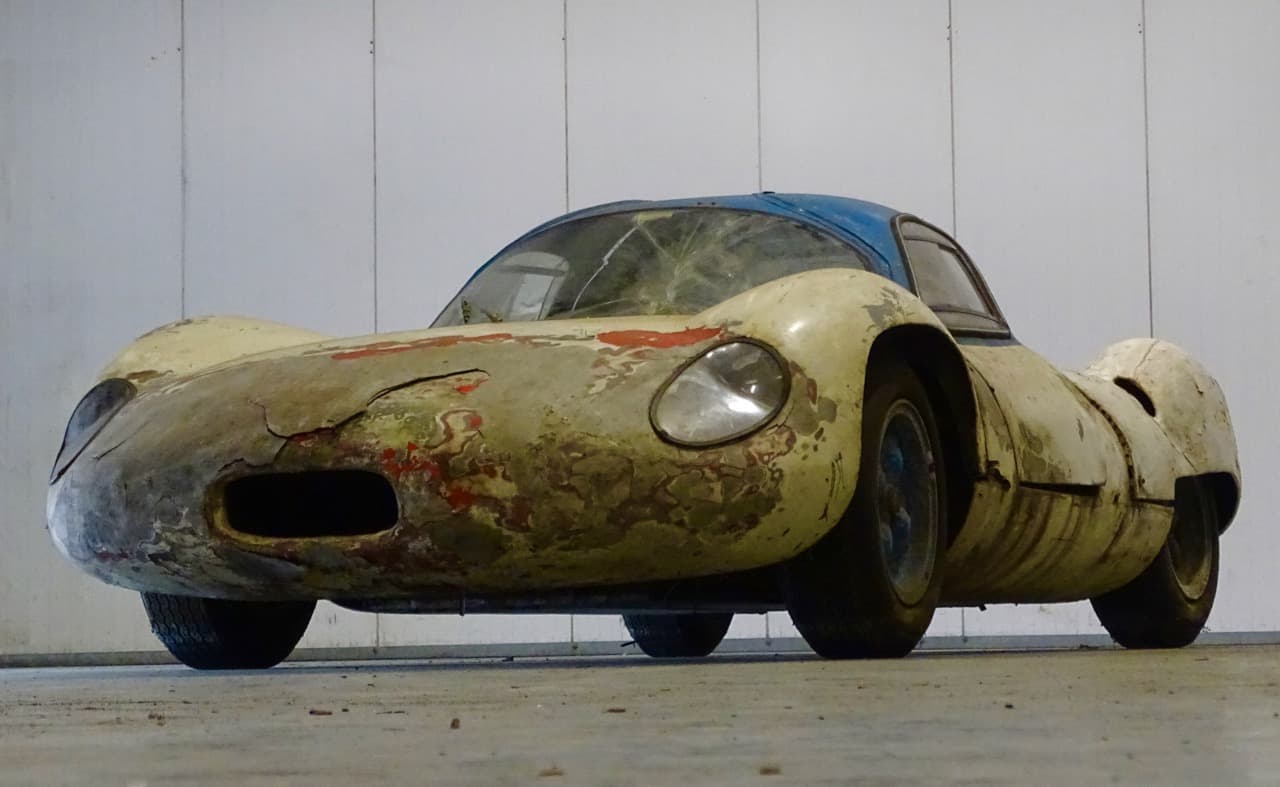 Discovered by a company hired to remove everything from a property, the Costin Nathan racing car will be offered for bidding as a restoration project July 10 at H&H’s Chateau Impney Hillclimb sale in the British Midlands. The car had been hidden away for 45 years.

Beginning in 1966, the two-seat Costin Nathan raced in both Spyder and GT guise. The car was owned and campaigned by Roger Nathan, a racer and tuner who specialized in modifying Hillman Imps, and later was driven by Chris Meek, who started racing motorcycles, moved onto four wheels with formula cars and went on to win six British production car racing championships in the 1970s and during the 1980 season. 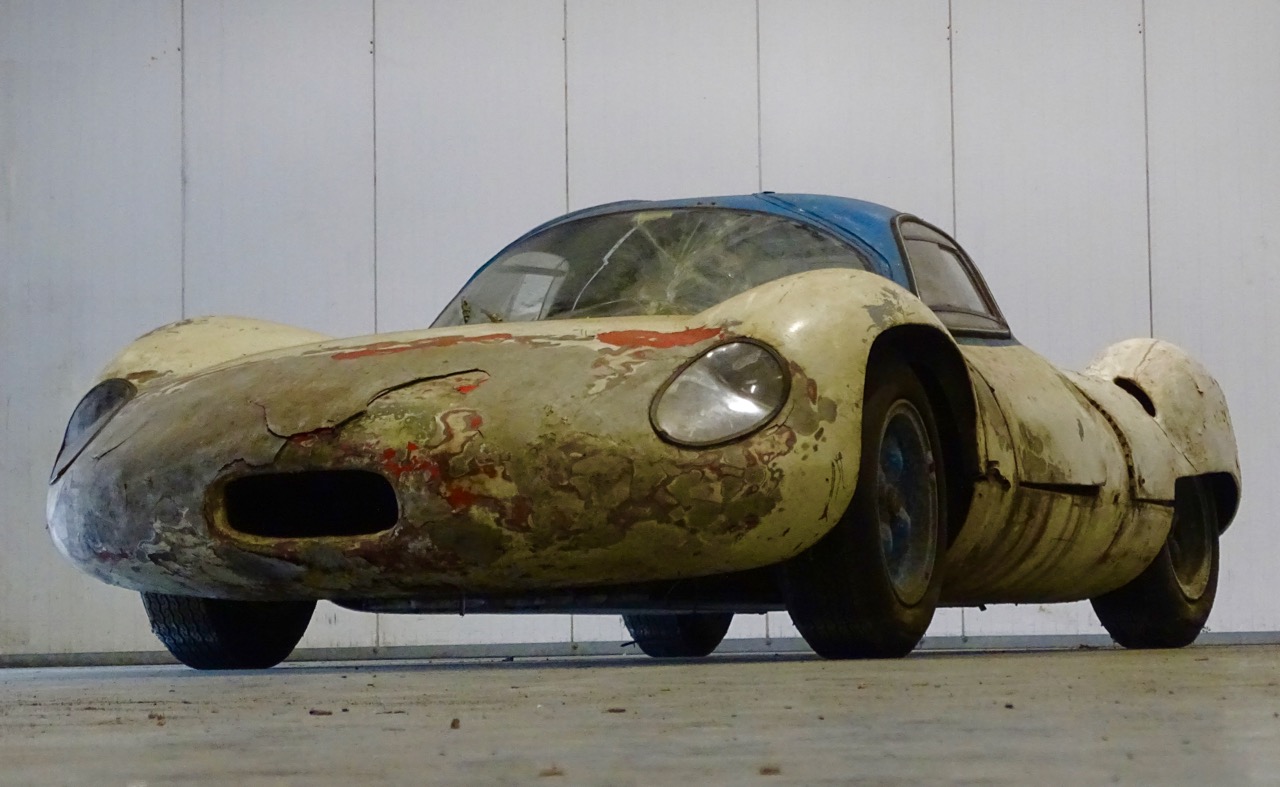 The Costin Nathan originally was powered by an Imp engine, but later was converted to the twin-cam and Hewland gearbox. It is being sold with a Hewland MK5 transmission and Ford-based twin-cam engine, although like the car, both parts of the drivetrain are in pieces and in need of restoration.

Frank Costin, the car’s creator, was an engineer at Havilland Aircraft in the mid-1950s and became a consultant to Lotus Engineering. He also designed the Vanwall that beat Ferrari and Maserati to win the Grand Prix constructors championship in 1956 for Tony Vandervell’s team. He also co-founded Marcos car company and produced several cars under his own brand.

“It is an amazing restoration project and a true ‘barn find’ slumbering in the late owner’s garage for the last 45 years,” former racer John Markey, who now heads H&H Classics Hindhead Surrey effort, said in a news release.

“This is quite a special car,” he added. “It is the original works prototype as driven with success by Roger himself in ’66. I’m probably dewy eyed having raced one quite extensively in the ’60s. From a personal angle, the car as an Imp-engined GT was a delight to drive, very quick in its class with neutral handling and my car did the Targa Florio, the Montjuich 12 hours and an event at Anderstorp in Sweden without any mechanical problems whatsoever.”

In its news release, H&H notes the car was, “a collaboration between legendary engineer/aerodynamicist Frank Costin and gifted racer/tuner Roger Nathan. Work on the nascent Costin-Nathan project began in 1965 with the prototype making its debut at the following January’s Racing Car Show.

“Like several of Costin’s previous designs, the newcomer featured a lightweight central monocoque tub fabricated from plywood with tubular steel sub-frames attached fore and aft. The resultant structure was not only commendably light but also reputed to be capable of handling 350 horsepower!

“Not able to get quite that power from a Hillman Imp engine, Roger Nathan was nevertheless able to coax a reliable 100 horsepower per liter out of the advanced all-alloy four-cylinder unit. Mid-mounted and canted over by 54 degrees, the 998cc powerplant was allied to a close-ratio gearbox. Weighing in at just 700 pounds and boasting all-round independent suspension, four-wheel disc brakes and magnesium alloy wheels, the Costin-Nathan proved prodigiously fast.

“Clothed in aluminium where its later production siblings used fiberglass, the works prototype achieved considerable success with Roger Nathan behind the wheel. Initially configured as a Spider, it recorded five class wins and a second-in-class during 1966; the undoubted highlight of which was Nathan’s victory in the Coupe de Paris on 25th September ahead of fierce Fiat-Abarth works opposition.

“Keen to raise funds and with an entry for the Le Mans 24-hours already in his sights, Nathan sold the works prototype to G.M. Horsley on 6th January 1967. The latter engaged the services of Chris Meek as a driver, installed a more powerful Lotus Twin-Cam engine and had the bodywork updated by Nathan to enclosed GT specification. However, various teething problems and some bad luck meant that the works prototype was never as successful in its revamped guise; Chris Meek scoring but one further class win at Snetterton during 1967.”

After “a few frustrating seasons,” the car was put into storage until its rediscovery and consignment to the auction.