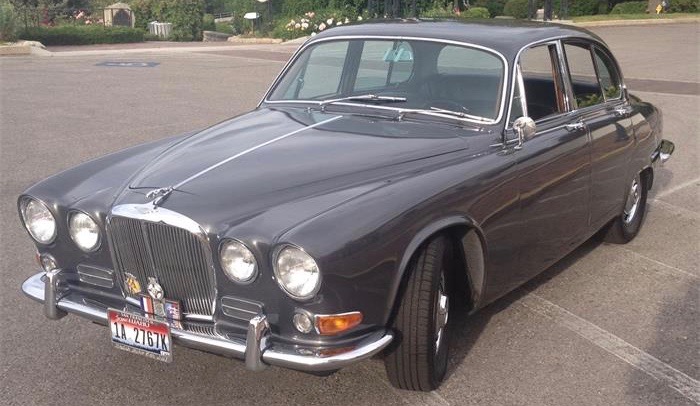 The E-type may get the most attention, but it was one of four Jaguar models sold in the United States during the 1967 model year. The others were the 340 and the 420 sedans, the latter available as the 420 or the 420G, the G short for Grand Saloon.

The Standard Catalog of Imported Cars reports that Jaguar sold more than 5,800 cars in the U.S. that model year, but this car’s owner notes that of the some 10,000 420s produced during the car’s two-year production run, only half were built with left-hand drive and perhaps only 100 came with both a four-speed manual and electric overdrive transmission. Our Pick is among them.

“This is an excellent all-original, low mile, strong-running example of one of Jaguar’s rarest cars from the Golden Age of Jaguar,” the seller notes in the advertisement on ClassicCars.com.

“The 420 shares the same 4.2 liter DOHC engine used by the XKE; combined with manual transmission, this car goes like a bat out of Hell. Super fun to drive, and oh-so-stylish.”

“This car has 86,000 original miles,” the seller notes. “Sold new in San Francisco, it has spent its entire life in California and Idaho. The car is completely rust-free, fresh and clean. Mechanically 100 percent, completely drip-free and dry.

“As my 80-year-old master Jag mechanic, who has worked on Jags since the early 1960s, says of the car: It needs nothing.”

The ad, which includes 100 photographs, notes that the car has always been garaged and was repainted in its original color three years ago.

It has optional power steering, but does not have a radio or air conditioning.