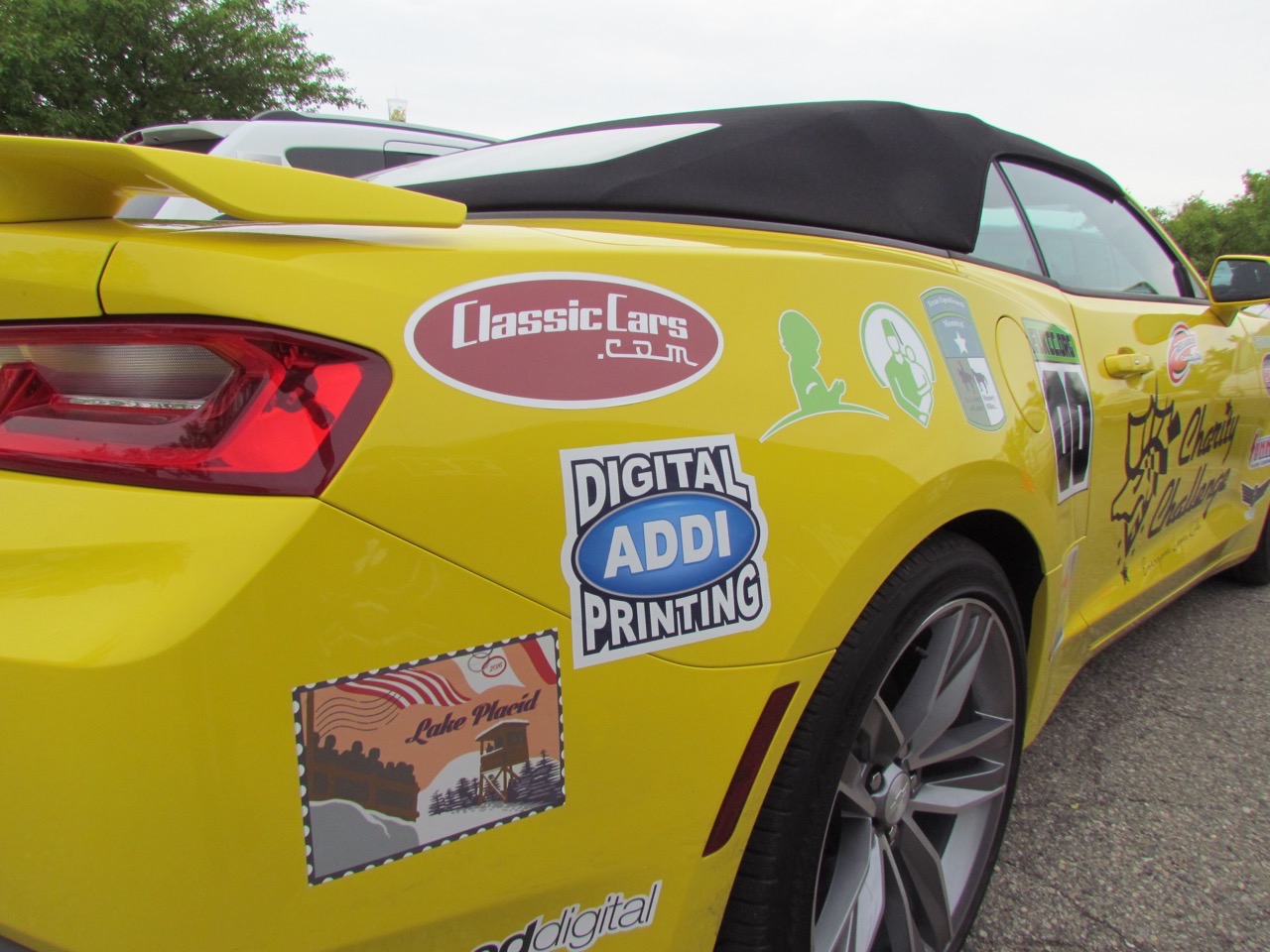 Thus when I knew I was going to take part in the ELK Charity Challenge, a legal-speeds road rally from Detroit to Lake Placid — and as long as I’d gone that far, when the event was over I’d continue on to Maine to visit a couple of car museums — I contacted Chevrolet and asked if I could borrow a new Camaro convertible for the trip. But I had one stipulation (who says beggars can’t be choosers?): I wanted the base version of the new Camaro, the one with the turbocharged 2.0-liter four-cylinder engine.

> The Camaro was stickerless when I picked it up…

Ah, it’s good to have friends in high places, because I not only got my Camaro convertible, in Bright Yellow paint with a Jet Black leather interior, but with a 6-speed manual gearbox and the RS version to boot.

I specifically wanted the turbo four because I’d already driven the V8-powered SS and also the V6-equipped new Camaro coupe, so I was eager to try both the convertible and the standard powerplant. I was not disappointed.

Not only does the turbo spool immediately, but with the aspirational boost, the four produces more torque than the V6, and the manual gearbox lets the driver make the most use of that output. And that output is strong enough that you’re not embarrassed, whether coming off the line or, more than likely, carving around the cones at an autocross.

… but ELK crew took care of that in short order

Our ELK route included a couple of laps around a paved oval track and a couple of drag racing runs on an airport taxiway. The drag race was fun, though uphill; what made the airport visit a real highlight was the fact that to get back in line for another run, we had use of the full runway, where the Camaro felt very comfortable as it posted three numbers on its digital speedometer.

Speaking of numbers, here are a couple more that were impressive: Over the course of the 3,539.8 miles I drove the RS, I averaged 30.4 miles per gallon.

Oh, and here’s another: The top can go up or down even while the car is traveling at speeds as fast as 30 miles per hour.

Another thing that distinguishes this newest-generation Camaro convertible is that when up, the top has the same profile as the coupe, and when down, the top disappears beneath a solid panel. Yes, that means the trunk is tiny, though you can unsnap the cloth panel that divides it to provide more room if you plan to driving with the top up. My solution was simply to put a suitcase that could hold the clothes needed for a two-week trip on the back seat and use the trunk for the souvenirs I accumulated along the route.

Camaro was popular when we visited a school

While I’m being critical, I’ll share a couple of other things I’d like to see changed and then get into some more things that I really liked about this car:

• At a toll booth, I got a quarter back as change and set it on the center console to the left of the shift lever. A while later, I reached for it and it was gone; it slid into the gap between the base and front sections of the console.

• To produce 275 horsepower and all that torque, premium fuel is recommended, though at 30 mpg average, that’s OK, though seems to go against the fact that the turbo 4 is the standard engine for the new Camaro.

• Minor issue, but it took me a while to figure out the window switchgear; there are three switches — one to select the front or rear windows, then the usual driver and passenger-side controls.

• My biggest issue was with OnStar and its navigation assistance. Traveling solo, I used it a lot. Some of the OnStar staffers were great, even asked if they could do anything else, even offering to make a room reservation. Others didn’t seem to care much. As I left Lake Placid, I specifically asked for a route that would include the Lake Chaplain Ferry. Instead, I was given a route that included a bridge.

• My other OnStar issue was the way, when I asked for a route to be updated, the download changed the display on the center console screen, eliminating the nice big map and instead showing me whatever station the radio was tuned to and just the direction of the next turn I was to make. Also, unlike many GPS systems, OnStar didn’t seem to know about construction zones along the way and several times wanted me to take exits that had been closed for construction, even suggesting U turns when I bypassed them.

I’ve praised much about the new Camaro in my earlier story. Here are some things I discovered, or re-discovered, over the course of my recent 3,500-mile trip:

• The car’s steering is precise and the response is immediate, not twitchy. The steering wheel is smaller than before and helps the car feel more like a Corvette.

• With the car wearing Bright Yellow paint, someone mentioned that it was like Bumblebee in the Transformers movie. And now the Camaro convertible truly does transform at the touch of a switch a panel opens, the top either emerges or disappears and a real transformation takes place.

• Rear visibility was not an issue, especially not with blind-spot warning exterior mirrors, a terrific rearview camera and rear cross-traffic alert that spots vehicles nearly half a block away as you start to back out of a parking place.

• The car has a gorgeous light signature, inside and out. With the RS, even the door sills light up, and the boomerang-shaped lights in the door panels not only look cool, but change colors to remind you whether you’re in Sport, Touring or Snow/Ice driving mode.

• Speaking of those driving modes, whichever you’ve selected stays active even after you’ve turned the car off. Next time you climb behind the steering wheel, that same mode is engaged. I love that. With so many cars you want Sport but have to remember to select it over and over again.

End of the road, and time to remove the stickers