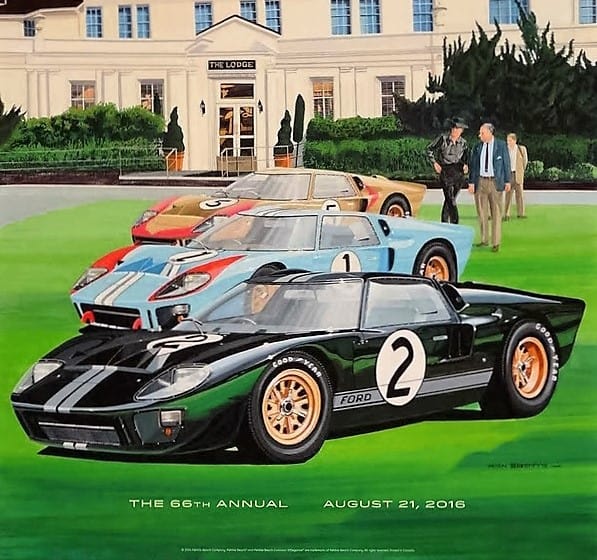 The Pebble Beach Concours d’Elegance has unveiled the official posters for 2016, with the artwork for the concours depicting the three Ford GT40s that won Le Mans in 1966 and the Tour d’Elegance poster showing a youthful Elvis Presley at the wheel of a BMW 507, which he famously owned.

Eberts, president of the AFAS since its inception in 1983, created a 30-by-40-inch painting in watercolor and gouache showing the trio of GT40s that finished an unprecedented first, second and third to win the 24 Hours of Le Mans, with the images of Edsel Ford, Carroll Shelby and Henry Ford II standing in the background.

The concours will mark the 50th anniversary of Ford’s achievement with a special display of championship GT40s on the grass of the 18th fairway of Pebble Beach Golf Links.

“It’s an honor to be selected as the 2016 Pebble Beach Concours d’Elegance poster artist,” said Eberts, who was a vehicle designer for Ford during the early part of his career. “This year marks a historic milestone when three American race cars defied all odds to beat some of the greatest champions in racing. Not only did Ford Motor Company and Carroll Shelby prove that Americans could compete with the lofty bluebloods, they showed the world that grit, ingenuity and passion could win the day regardless of pedigree.”

The concours also honors the 100th anniversary of the founding of BMW. Rowe’s painting is meant to evoke a nostalgic moment with Presley and a lovely young woman touring the Monterey coastline in the classic BMW 507 roadster. It is fantasy moment, however, since Presley owned the 507 while stationed with the Army in Germany.

“The BMW has lovely shapes to paint and I wanted to place the ‘King’ driving his elegant 1950s BMW along the same route on PCH1 that those driving the Tour will take,” said Rowe, who has created 19 official posters for Pebble Beach since 1998. “I enjoyed finding a new way to portray the Tour’s nostalgia and also gently pay homage to a pair of icons, Presley and the 507.”

Both original paintings will be displayed at the AFAS exhibition during the concours August 21, and the posters will be available for purchase. Concours spectators can meet the artists at the AFAS display from 9 a.m. to 4:30 p.m. during the August 21 concours.

For more information about the Pebble Beach Concours d’Elegance and Tour d’Elegance, and other events of Pebble Beach Automotive Week, visit the concours website.