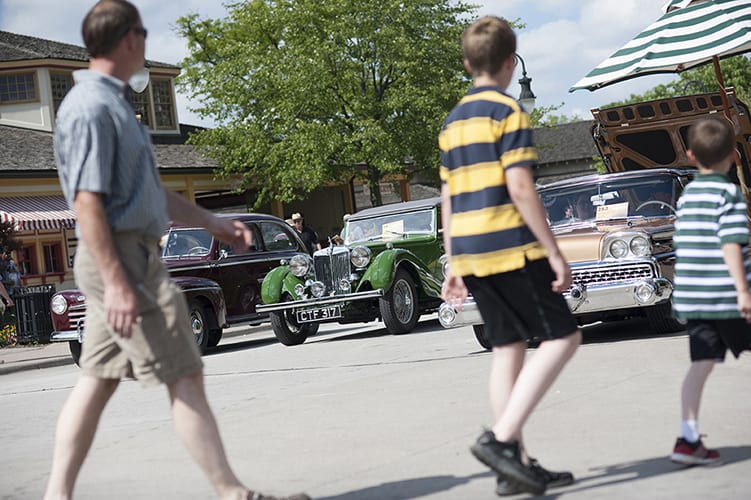 The Father’s Day celebration runs June 14-23 at the LeMay – America’s Car Museum in Tacoma, Washington, with the fifth annual Hoods Up for Father’s Day event. Hoods will be up on 100 vehicles to showcase engines.

Hoods will also be up on cars June 18-19 at the America on Wheels Museum in Allentown, Pennsylvania. The museum will offer free admission to dads with the purchase of an adult ticket.

The California Automobile Museum in Sacramento celebrates with free rides in classic cars from 10 a.m. to 3 p.m. on Father’s Day, when Dads and Granddads get free admission.

Father’s Day also marks the 10th annual Blackhawk Museum Father’s Day Car Show. Located in Danville, California, the show is open to collectible, rod, classic, or muscle cars, or dads can just bring their favorite ride. Car entrants receive free admission to the museum and a swag bag. A Father’s Day champagne brunch will be available inside the museum.

Dad’s get into the Lane Motor Museum in Nashville ,Tennessee, for free on Father’s Day and free admission with one paid admission is offered at the Simeone Museum in Philadelphia while the NCM Motorsports Park in Bowling Green, Kentucky, offers gift certificates for Father’s Day that can be redeemed for touring laps in your own car, hot-lap rides in one of the track’s Z06 Corvettes, or applied toward the high-performance driving school.

The Owls Head Transportation Museum holds an “All-American Auto Meet” to celebrate Father’s Day weekend with events Saturday and Sunday, showcasing  all pre-1996 vehicles. Show highlights include discussions with Tom Cotter, author of the “in the barn” books as well as author David Hill.

Saturday, the Auburn Cord Duesenberg Museum in Auburn, Indiana, holds a Cars and Coffee gathering at the museum’s education and exhibit plaza from 9 to 11 a.m.

Saturday night, the Henry Ford Museum in Dearborn, Michigan, invites enthusiasts to “Motor Muster,” a show set to feature 500 classic cars from the 1930s to the 1970s. The show also acts as a celebration of Camaros 50th anniversary with dancing in the streets till 9 p.m.

This Saturday, Muscle Car City in Punta Gorda, Florida, holds its monthly car show at the museum from 9 a.m. to 1 p.m.

The AACA Museum in Hershey, Pennsylvania, holds its annual CARnival Car Show on June 18. Participation is open to all makes, models and years while the featured class consists of early SUV’s. Participants can also tour the museums “super-secret collection storage” building and take rides in an antique car.

The National Corvette Museum celebrates its 22nd anniversary in conjunction with “R8C Museum Delivery” over Labor Day weekend. The anniversary and R8C include car shows, seminars, road tours, and the Corvette Hall of Fame Induction ceremony. Bob Bondurant, Ralph Kramer, and the late Donna Mae Mims will be inducted.

June 18-19, the National Corvette Museum hosts a live feed of the 24 Hours of Le Mans race in the museum theater with live timing and scoring along with refreshments and hourly updates from the Corvette race team. Registration is $100.

The Petersen Museum in Los Angeles has partnered with Michelin, Microsoft and Ford to launch the Forza Motorsport Membership Pass for the viewing of the 24 Hours of Le Mans on June 18. During the viewing, three-person teams will be able to compete in a three-hour endurance race in the Ford GT on the museum’s Forza Motorsport 6 simulators.

This Sunday, 120 participants competing in the Great Race will finish their day of racing at the National Automobile Museum in Reno, Nevada. Following their arrival, a ceremony will take place at the museum as a 1907 Thomas Flyer joins a permanent archive of historically significant automobiles within the Library of Congress. The racers will arrive around 4 p.m. and the ceremony will commence at 6:30 p.m.

The LeMay- Americas Car Museum will show E.T. – The Extra-Terrestrial on June 25 as part of its drive-in movie series on the Haub Family Field. Parking for the show starts at 4:30 p.m. and the movie starts at dusk. The event is free but does not include Museum admission.

The World of Speed Museum in Wilsonville, Oregon, offers a “simulator race series” with the simulator set in Damage mode, meaning cars will behave and sustain injury as in real driving. Participants get a practice run and qualifying run June 30, July 28, August 25, and September 29 from 5:30 p.m. to 8 p.m. Drivers with top qualifying race times advance to the finals on October 27.

The Auburn Cord Duesenberg Museum offers discounted admission to those who drive their classic cars to the museum on July 10 in celebration of Collector Car Appreciation Day.

Tickets are available to purchase for the 2016 Automotive Hall of Fame Induction & Awards Gala Ceremony. The black tie event is set for July 21 in Detroit, Michigan and honors inductees: Bertha Benz, Roy Lunn, Alan Mulally, and Raplh Nader in addition to Matt Simoncini as Industry Leader of the Year.

June 21, the Mullin Automotive Museum in Oxnard, California, opens  the hoods on some of the museum’s significant French automobiles, including the 1934 Bugatti Type 54, 1935 Hispano-Suiza J12, 1938 Delahaye 145 Coupe and 1902 Panhard et Levassor B1 Rear-Entrance Tonneau. The hoods-up event is set to run from 10 a.m. to 3 p.m.

The Petersen Museum holds a lecture on June 28 with Larry Crane to discuss “Automobiles, Architecture, and Innovation in Los Angeles: A Retrospective on a Creative Future.” The discussion is set to take into consideration how sun, surf and speed conspired to accelerate the development of brick, mortar, and metal into the sculptural landscape of what became a city known for its creativity and innovation.

Bobby Rahal, winner of the 1986 Indy 500 and the first Indy driver to complete the 500 miles in less than three hours, is slated to appear at the Blackhawk Museum on November 12 as part of the museums Speaker Series.

On June 18, the Kansas City Auto Museum showcases an invitational car exhibit from 9 a.m. to 3 p.m. Exhibit highlights include free admission, a raffle, silent auction, and ride-alongs in vintage cars.

The World of Speed Museum in Wilsonville, Oregon, celebrates the 100th running of the Indianapolis 500 with its first major exhibit showcasing 33 Indy racing cars, including Mario Andretti’s 1981 STP car, Al Unser Sr.’s 1967 car and Al Unser Jr.’s 1984 car. The exhibit will include memorabilia from some of the Pacific Northwest’s greatest drivers and car engineers, including Art Pollard, Len Sutton, Rolla Volstedt and Parker Johnstone. Suits, helmets, shoes, gloves, models and photos will be featured, along with World of Speed’s complete collection of Indianapolis 500 race programs.

The National Corvette Museum also features an IndyCar exhibit in celebration of the 100th running of the Indy 500. Held in the museum’s exhibit hall, the display will feature a number of IndyCars through the years and is set to run from today, June 10, through October 14, 2016.