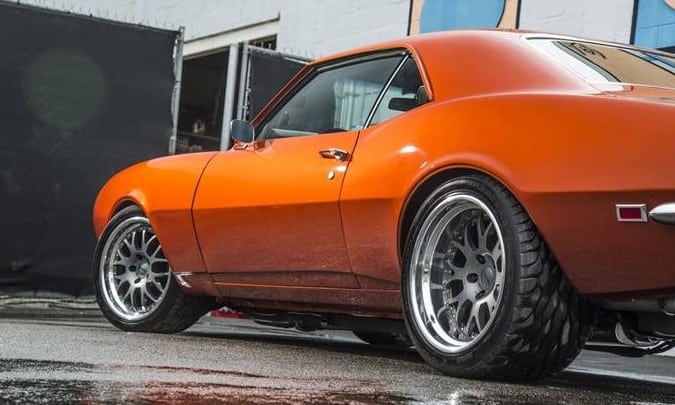 In the ’60s and ’70s, car enthusiasts sought to provide that special something they felt Detroit left out of the equation. They substituted style for stock with killer stance, sparkling mag wheels, engines that towered out of the hoods, and paint schemes that would have embarrassed even the most stereotypical ’70s custom van.

Disrupting the mundane flow of stock-daily-commuting life is the Pick of the Day, a fast and flashy 1968 Chevrolet Camaro listed on ClassicCars.com that embodies all that was good about hot rodding and modding muscle and pony cars of the era.

Set up as a “pro-touring” Camaro, this build was featured at the Nitto Tire and Driving Line booth during SEMA in 2015 after having its restoration completed a few months prior in July. According to the listing, “all work was done professionally and all parts were meticulously selected and the project was actively managed by myself.”

Powering the Camaro is a 383 cid stroker Chevy small-block built by AES Engine Specialties, rated with a 525 horsepower output, that has been fitted with Brodix heads in addition to a Holley Dominator throttle body, mated to a T-56 6-Speed manual transmission equipped with a Centerforce Performance clutch and Hurst short shifter. The Camaro also features a Moser 9-inch rear end with 3.80 gears, while the engine growls with Dynatech ceramic-coated long-tube headers hooked to a Magnaflo stainless steel exhaust system.

The Camaro gets its aggressive stance sitting on a set of 18-inch Forgeline WC3 3-Piece wheels wrapped in BF Goodrich g-Force rubber. Peering through the wheels are red Wilwood calipers with 6-pistons in the front and four in the rear, hugging 14-inch vented and cross-drilled rotors. To fit the wheels, an adjustable coilover suspension by Ride Tech was utilized, as well as a set of StrongArm tubular control arms in the front and Ride Tech 4-links in the back.

A majority of the car’s body consists of original metal, which the seller says was rust free, with perfect  panel gaps. To achieve a balance between a classic style and new-school flair, the car has been show-quality finished in Plymouth Prowler Orange.

The interior was inspired by the 1968 factory deluxe interior that blends in custom power leather BW M3 seats. From the driver’s seat, the car retains the original dash but backlit digital gauges from Autometer have been fitted as well as Anvil Auto custom pillar gauges. Other highlights include a Sparco steering wheel with horn and Modo Innovation racing pedals.

The Camaro is offered for $125,000 by a private seller in Hermosa Beach, California, who says the car has gained just 400 miles since the completion of restoration.