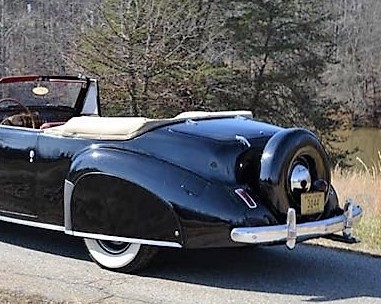 Edsel Ford was well-known for creating specially built Ford cars for his personal use. During the late 1930s, he wanted a special one-off convertible to use in Florida during the winter, and he asked Bob Gregorie at Ford to design one for him. Gregorie’s custom design was based on the Lincoln Zephyr, but lowered and extended 12 inches. He also removed the running boards.

The car was powered by the fabulous Lincoln V12 flathead engine, partially due to its exclusivity but also because of the car’s tremendous weight.

The styling of the car was an immediate hit and reaction was so positive that Edsel called Ford HQ to tell them that he could sell 1,000 of the cars immediately. Thus was born the Lincoln Continental, which was produced through 1948. The design was so well-received that the Museum of Modern Art in New York selected the Lincoln Continental for display as one of eight automotive works of art.

The Pick of the Day is a 1941 Lincoln Continental convertible that comes from a well-respected collection where it was owned for more than 20 years.

According to the Conroe, Texas, dealer advertising the Lincoln on ClassicCars.com, the car was restored 30-plus years ago but has held up well. It was finished in proper black lacquer paint that is still presentable, though it does exhibit some cracking, for which lacquer is known. The car features burgundy leather seating and a tan Haartz convertible top. It is powered by the legendary Lincoln 292 cid V12 engine and three-speed manual shifter on the column.

I am primarily a sports car owner and collector, so it might seem strange that I would choose a pre-war Lincoln for Pick of the Day. Well, the reason I picked this car – which qualifies as an AACA full classic – is that I recently had the opportunity to drive one in Hershey.

Previous to experiencing the Lincoln, I drove a 1939 Bentley Mk. V convertible with coachwork by Saoutchik and a 1950 Delahaye 135M Cabriolet with coachwork by Guilloré. Although those two exotic Europeans are worth many times the value of the Lincoln, when I got behind the wheel of the Continental, I was surprised at how much the Ford product had a similar feel.

The driving experience was much the same as the Bentley’s and the Delahaye’s, which also surprised me. I expected the Lincoln to drive like a typical American classic with typical truck-like drivability. Instead, the Lincoln performed as good as or better than its pricier European contemporaries. The V12 engine was incredibly smooth, and the overall feel was that of a custom handmade car, such as the two coachbuilt Europeans. Only the Lincoln Continental was handmade in Detroit.

The asking price is $62,900, which when compared with the Bentley or Delahaye seems like quite a deal. The Lincoln has hand-built exclusivity and AACA eligibility for shows, and I don’t think there is a better deal out there for a full classic car that is also so nice to drive.