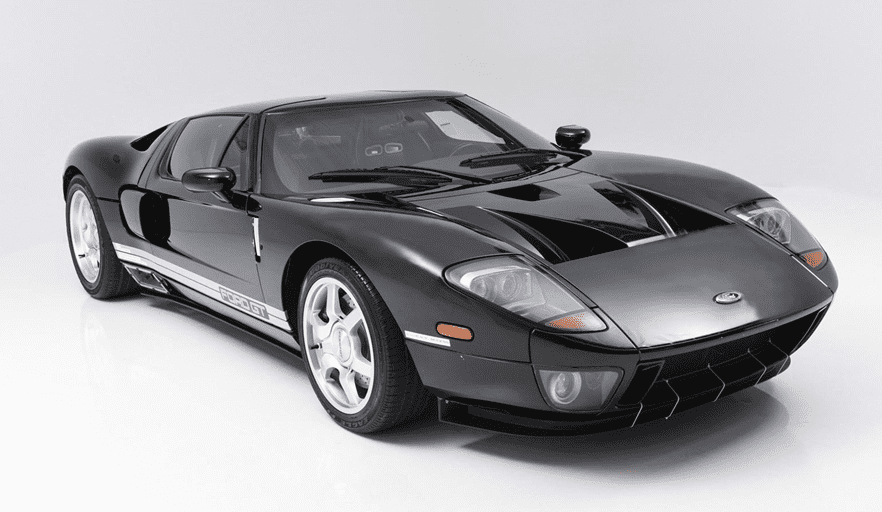 Editor’s note: This is the second in a 10-day series featuring cars to be sold June 23-25 at Barrett-Jackson’s 2016 Northeast Auction.

Drawing inspiration from Ford’s GT40 of the 1960s, the Ford GT was an mid-engine two-seat sports car produced in 2005 and 2006. Its successor, also the Ford GT, is slated for production as a 2017 model and is racing this summer in the 24 Hours of Le Mans, where the GT40 beat Ferrari 50 years ago.

Being offered at Barrett-Jackson’s Northeast auction is a 2004 Ford GT Prototype, CP-1 (Confirmation Prototype 1), VIN 004, one of the concept cars developed prior to production. (Also on Classic Car News today, you can read the backstory behind the GT program and CP-1 based on research for Ford GT: The Legend Comes to Life, written by editorial director Larry Edsall.)

Inside of CP-1, written note on how to start the car

CP-1 is offered with a reserve as Lot 654 and set to cross the block during Barrett-Jackson’s inaugural Northeast auction, June 23-25.

While this is the fourth prototype developed for the Ford GT, what makes this prototype significant is that it was the first one that was fully functional with a full drivetrain and interior. It was built in 2003 as part of the vehicle development program. Prior cars had been developed and built for exhibition but were not operational. Those vehicles reside in a Ford collection.

CP-1 is offered with factory build sheet documentation and remains fitted with test connections and monitoring equipment used in road and emissions certification testing. The car is autographed by 13 members of the GT design and engineering teams, including Carroll Shelby, Bill Ford, and chief engineer Fred Goodnow.

This prototype offers an array of non-standard components and many design features that are exclusive, such as the airbags, which are Mustang components, and the steering column from a Ford Windstar. The silver trim rings on the seats of CP-1 didn’t make it to production and the all-aluminum headliner was replaced in production by a more traditional sound-padded roof. Other highlights include a note scrawled in marker on the center console that ominously instructs test drivers to “push red button to start” the rear-mounted V8 engine.

The exterior right quarter panel features two quick-release valves connected to the fuel tank that aid in swift changes of fuel grades. Additionally, extending beyond the rear bumper is a set of experimental exhaust pipes connected by a “sniffer pipe” that helped engineers determine accurate emissions output in testing.

The engine compartment is fitted with a carbon-fiber rear clamshell that dramatically reduced curb weight, however it was not used in production because of its cost — $45,000. The idea was scrapped in favor of a far less-expensive aluminum tub.

Another variation in CP-1 is that its engine has a black supercharger and valve covers, while production cars have a silver blower and traditional Ford-blue valve covers.

While CP-1 has a fully functional powertrain and the car has a 17-digit VIN, it is not street legal. Ford sold the car in 2008 to a GT collector, and prior to that sale Ford engineers installed a chip in the engine to limit top speed to 5 mph.

Other stipulations include that the vehicle is for display purposes only and the buyer is required to sign an acknowledgment, or similar agreement, with Ford Motor Company that may restrict the future transfer of the car.