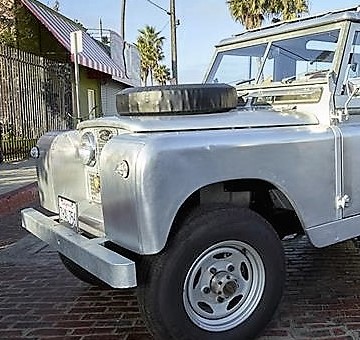 The  Pick of the Day is a 1965 Land Rover Series IIA with a difference. Still the same go-anywhere, do-anything utility vehicle known around the world for its sturdiness, but now with some critical upgrades for modern driving as well as an interesting exterior finish.

Interesting, as in there is none. Instead, the Rover sports its aluminum body panels unsullied by paint, just the silver-metallic gleam of the metal itself. You can do that with aluminum – or aluminium as they say in the SUV’s British homeland – instead of having it turn into a rusted mess as with a steel body.

There is some extra care required to keep the Rover looking sharp, according to the Venice Beach, California, owner who’s listed the SUV on ClassicCars.com. The Rover was completely restored, the owner says, and has been driven just 3,500 miles since.

“The exterior finish is the original aluminum body panels unpainted, but polished; it’s not treated with anything,” the owner says in the listing. “I have polished the car twice during the year since getting the car back from restoration to keep shiny.”

The “nut-bolt restoration” was completed over two years by Land Rover expert Peter Petrovi of Marina Motors, according to the seller. “I probably have $80,000 in the car at this point now…”

“Everything (was) rebuilt or replaced to original specs,” the ad says. “I did add a few creature comforts, though, for the daily driver and better comfort. Marina Motors has a great power-steering setup that I decided to have done. It’s wonderful to have for city driving and parking. I also used a Series III transmission instead of the Series II for better synchros and performance. Also with the transmission, I had ‘Rover Drive’ overdrive installed for going on the freeway.”

The overdrive sounds like a great addition since otherwise these trucks bellow at 60. Other improvements include four-wheel disc brakes, all-new green-leather interior with extensive heat-and-sound matting under the new carpeting, seat belts for all six seats and Pioneer Bluetooth audio.

The Rover comes with its original tool kit, owner’s manual and service book, as well as a complete photo diary of the restoration, the owner says.

Asking price seems reasonable at $48,500 for something as special and desirable as a tastefully improved classic Land Rover, which you could either thrash in the boonies or keep pristine as a daily driver or show car.