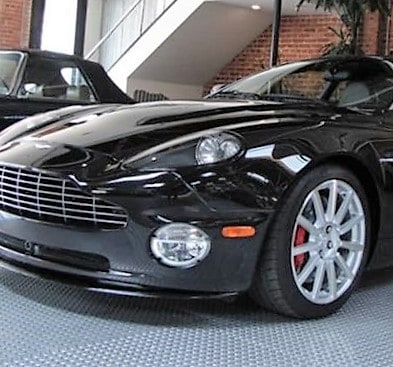 Aston Martin has a mythic quality to its brand. Not only were Astons driven by none other than fictional superspy James Bond, they have been driven by real-life princes, kings, head of state and celebrities the world over. There are few more exclusive or storied brands than that of Aston Martin.

As a result, Aston Martins are cherished collectibles, some of them from the classic 1950s and ’60s era selling for millions of dollars.

The Pick of the Day is the last of the affordable handmade Aston Martins and a true supercar exotic, a 2006 Aston Martin Vanquish located in Hollywood, California.

The Vanquish is not only the last handmade Aston but the last model made in the legendary Newport Pagnell factory, the same factory where the ‘50s and ‘60s DB cars were created. The Vanquish also is the Aston Martin that its designer, Ian Callum, considers his favorite car that he designed for the company.

The Vanquish is not just a stunning design icon but a movie star, having been featured as James Bond’s ride in Die Another Day. It is also an awesome performer, its booming 6.0-liter V12 engine making it capable of a 0-60 time of 4.7 seconds and a top speed of 190 mph.

According to the listing on ClassicCars.com, the Vanquish has been driven only 29,000 miles, and it is in original, excellent condition.

The car wears its original Onyx Black paint with contrasting Obsidian black leather and grey alcantara interior, and a diamond-stitched alcantara headliner, the dealer says, adding that this car has a full service history, and all books and tools that were delivered with the car when new.

This Vanquish has an asking price of only $95,500, about $10,000-$15,000 under value, and there is most likely some negotiating room there, making for what I would call a solid deal on a practically guaranteed future collectible. The original list price was more than $250,000.

Total production of the Vanquish was only 1,492, with much few made than the comparable Ferrari 550 Maranelo, of which 3,715 were made. I bring this up simply because a 550 Maranello is selling for around $150,000, making the Vanquish look like quite a deal.