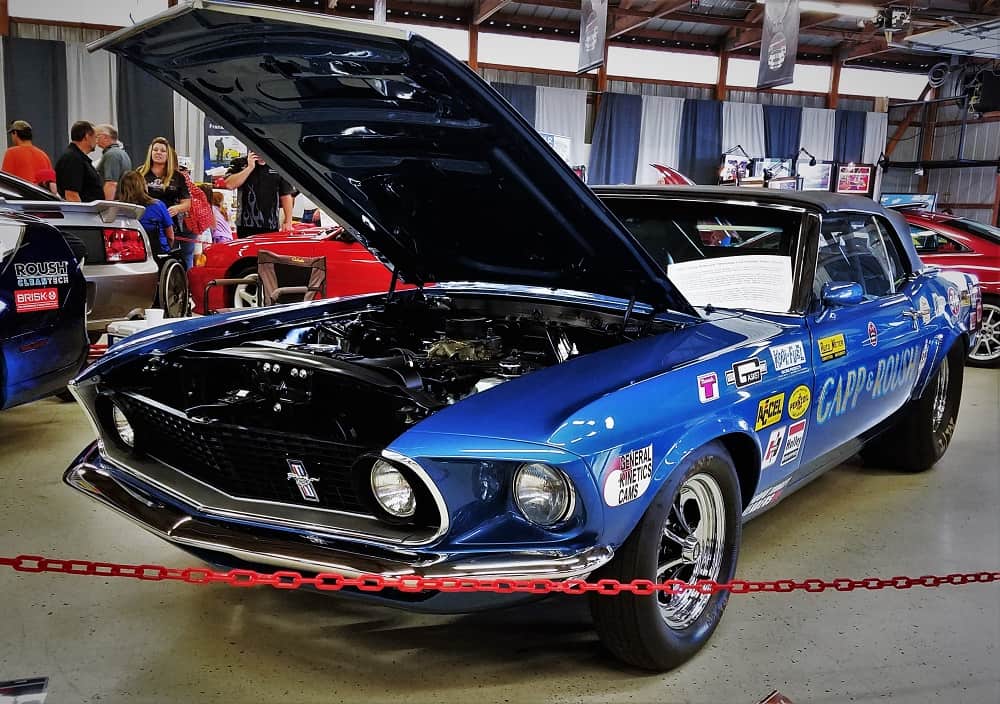 After five years and multiple championships in partnership with Wayne Gapp, Jack Roush in 1976 launched his own company, Jack Roush Performance Engineering to build engine and to work with a variety of racing teams. Last weekend at the Ford Nationals at Carlisle, Pennsylvania, the 40th anniversary of Roush’s company was celebrated with a display of significant Roush cars.

Among those cars was a 1969 Gapp and Roush Super Stock Mustang convertible. Mike Rey, marketing director for what now is known as Roush Performance, said Roush purchased the car in 1971 to showcase “Gapp and Roush’s parts and tuning business that they shared. He wouldn’t have started his company if it wasn’t for this car.”

The next key vehicle in Roush history was also on display, a 1994 Mustang that has come to be known as the Roush Performance Prototype No. 1. According to Rey, this Mustang was “Roush-afied” to demonstrate the company’s capabilities to Ford and its Special Vehicle Operations. Modifications included, among other things, a 5.8-liter V8, stiffened suspension and a custom cowl induction hood.

Also on display was a 2000 Mercury Cougar, one of 112 built featuring Roush cosmetics and badging but without any power upgrades. Alongside the Cougar sat a 2008 Roush P-51 Mustang with 510 horsepower, No. 51 of 151 built. Owned by Jack Roush, “It’s his personal car, his pride and joy,” said Rey, noting that the Mustang features a three-valve, 4.6L Roush V8 producing 510 horsepower and 510 pound-feet of torque and with exterior paint that mimics its World War II fighter namesake.

Additionally, a 2010 Roush Drag Team propane-powered Mustang was on display. What makes this car unique is that it’s been driven by three-time champion (and Roush’s daughter) Susan Roush McClenaghan in NMRA’s Modular Muscle events. The car runs on propane autogas and produces 890 horsepower from a 5.0-liter Ford Coyote block, bored and stroked to 311 cubic inches of displacement.

The center of the display featured the 2015 Xfinity Series race car that earned the 2015 championship for Chris Buescher, driver for Roush Fenway Racing.

Yet another and separate display at Carlisle showcased a 2016 Roush Stage 3 Mustang with 670 horsepower thanks to a “Roushcharged” 5.0-liter Coyote V8. Aside from the power, what made this car special is it’s exhaust system. The system features three different exhaust sounds with yet a fourth that is customizable through an iPhone app that allows drivers to select their own exhaust note.

Roush is working to develop the technology for all Mustangs since the 1979 model year.

The main Roush display also included a few vehicles from the Roush Road Crew, a lifestyle club for Roush owners and enthusiasts.

“Currently, the Roush Road Crew has 2,700 members,” Rey said, “Forty to fifty of them are here at the show, but we hold lots of different cruises and caravans for them, events, and are doing this thing called the Roush Pack.”

According to Rey, there’s also the Roush Pack, a points system for members. Those who attend the most car shows, and thus accumulate the most points, receive a one-off Roush jacket and a trip to the annual SEMA Show.

Rey noted that members can earn points at several upcoming events, including another 40th anniversary celebration during the Woodward Dream Cruise and the Mustang Memories All-Ford show in Dearborn, Michigan.