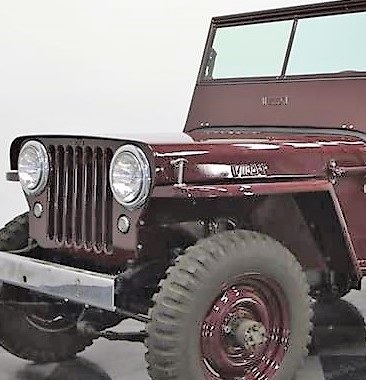 On the day after the 72st anniversary of D-Day, when Allied forces landed at Normandy on June 6, 1944, to launch the massive invasion that liberated Europe from the Nazis, here is a Pick of the Day that represents the most famous and longest-lasting automotive relic of World War II.

The 1945 Willys Jeep CJ2A was the first civilian Jeep model (thus: CJ), and this restored example painted in dark maroon is ready for shows and parades, or else doing what it does best: conquering nearly impassible terrain.

“The tough little Jeep was so good at its military life that Willys knew it could be a returning soldier’s best friend when he returned home,” says the Lutz, Florida dealer advertising the Jeep on ClassicCars.com. “After all, the same tough construction and go-anywhere ability could find a nice use on the farm or jobsite.

The simple utility vehicle is an instantly recognizable icon to just about anyone, resonating both as a memory of its success in wartime as well as its popularity today, updated many times over but still a Jeep.

The asking price of $18,995 seems like a bargain for this piece of history.

“This 1945 Willys Jeep CJ2A has great color coordination and barely 700 miles on it since its full mechanical rebuild, but (you) really know why you’re stopping to check this one out,” the seller notes. “It’s hard not to get excited about driving the bedrock of freedom, especially when it’s this affordable.”

The civilian Jeep has been kept to its original configuration, although with some upgrades, the dealer says in the listing.

“An icon like this doesn’t need a makeover, but the addition of maroon paint really does add some nice distinction without altering the appearance,” the listing says. “Even the chrome bumper and bright hood pins offer a style upgrade without making this hero appear too flashy.

“The current owner has had the vehicle for 13 years. During that time, it has been restored and always garage kept. And it’s this level of respect and care that’s the true key to why this Jeep looks so spectacular today.”

“The Go Devil motor proved to provide good torque and was as reliable as an American solider,” the dealer notes. “Heavy-duty features include the oil-bath air cleaner and a big oil-filter canister on the side of the engine block, both critical for longevity in the field.

“When this drivetrain was rebuilt 13 years ago, everything was believed to be original. Since then, there has only been 710 miles on the Jeep. So today, this CJ2A fires up easily, idles nicely, and shifts with accuracy. The chassis remains exceptionally clean, and the oversized hubs on the sturdy axles are designed to keep the Jeep alive in the worst of situations.”

Of course, getting an early Jeep that’s this nice would present the classic collector car conundrum for its next owner: keep it under wraps and in impeccable condition or go out into the back country and savor the off-road prowess for which it was originally built.