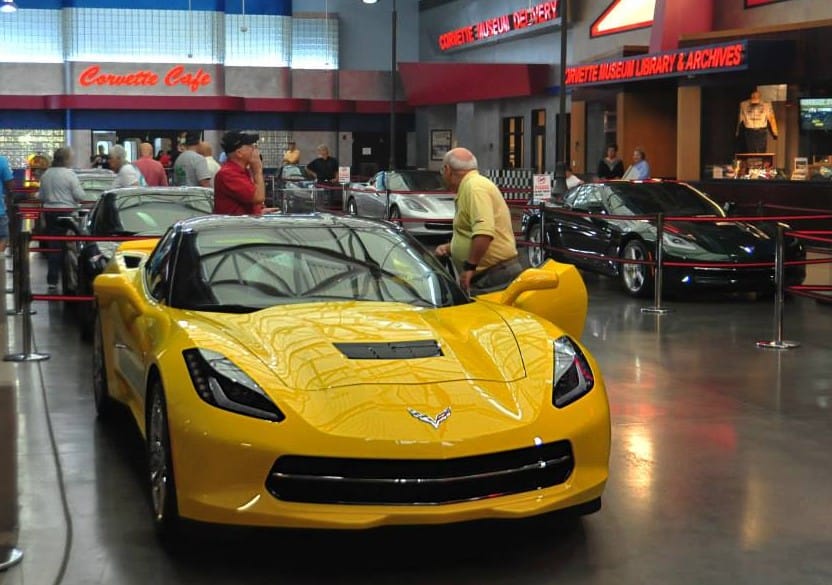 Saturday, the Kansas City Auto Museum holds Cars and Coffee from 8 a.m. to 10 a.m. at the museum in Olathe, Kansas.

The following day, the Blackhawk Museum in Danville, California holds its cars and coffee, also from 8 a.m to 10 a.m.

The Blackhawk Museum holds its “Day at the Races,” on Saturday, which provides registered museum participants with parking next to the paddock at Sonoma Raceway during the Sonoma Historic Motorsports Festival. Other features include use of the Simeraceway hospitality pavilion complex, and the opportunity to do laps in the participant’s own classic or collector vehicle during the SVRA’s lunch session, and a tour of the Simeraceway driving center.

The Gilmore Car Museum plays host to the 30th anniversary of The Classic Experience from today through Sunday. The event includes a driving tour, a Grand Classic Concours d’Elegance, and “The Experience” car show, all presented by the Classic Car Club of America Museum. The show features automobiles from 1915-1948.

The Owls Head Transportation Museum in Owls Head, Maine, kicks off its 2016 car show season on Saturday and Sunday. Alongside the car show, open to vehicles pre-1996, the museum intends to demonstrate as many vehicles as possible from their ground vehicle collection, and beat last year’s record of 75.

The British Motor Museum stages its “National Metro & Mini Show” on Sunday. The show is set to include a “Car Gymkhana,” allowing participants to match a pre-set time around a track, other highlights include a concours, a non-concours with classes including Most Non-Functioning Accessories, Worst Interior, Biggest Area of Rust, Craziest Engine Bay, and more.

The Automotive Hall of Fame in Dearborn, Michigan plans Cars and Coffees on Sunday, and August 27 and October 15.

The Auburn Cord Duesenberg Museum offers cars and coffee on June 26 at the museum’s education and exhibit plaza.

The California Automobile Museum hosts “Cruise Fest on Fulton Avenue” on September 10. The show is set to include live music, a beer garden and food trucks.

The World of Speed Museum in Wilsonville, Oregon offers “simulator race series.” With the simulator set in Damage mode – meaning cars will behave and sustain injury like a car in real life – participants are given a practice run and qualifying run in the museums race similar on June 30, July 28, August 25, and September 29 from 5:30 p.m. to 8 p.m. Drivers earning top qualifying race times will advance to the finals, held on October 27.

Additionally, the museum holds its 2016 Spark Gala on September 17. The event is an effort to raise funds for the museum’s educational programs.

The LeMay-America’s Car Museum holds its Wheels and Heels annual Gala on Saturday. Casino Royale is the theme and features sultry sounds on the Anderson Plaza, blackjack, or guests can spin the roulette wheel while sipping martinis, shaken not stirred. Funds raised at the Gala will benefit the museums education programs and the Hagerty Education Program at the museum.

The museum holds its fifth annual Vintage Motorcycle Festival, the MEET, on July 30.

The Auburn Cord Duesenberg Museum offers discounted admission to the museum in Auburn, Indiana, to those who drive their classic cars to the museum on July 10 in celebration of Collector Car Appreciation Day.

The Simeone Museum is holding The next class in a six-part series on the foundations of automotive photography at the Museum is June 4, followed by July 30, September 17 and October 29.

The National Sprint Car Hall of Fame Museum’s series of monthly “Sprint Car 101 forums” will be held at the museum in Knoxville, Iowa, on June 11 and July 16.

The LeMay Marymount in Tacoma, Washington, features a Model T driving class Saturday  as well as July 9, August 13 and September 10.

The next Science Saturday at the National Automobile Museum in Reno, Nevada, in June 11 focusing on “Roving Mars,” “Journeying to the moon” on July 9, and “Food in Space” on August 13.

The Auburn Cord Duesenberg Automobile Museum hosts a number of Children’s Activity Days in June and July. The museums “camp” runs from 10 a.m. to 3 p.m. and immerses campers, ages 10-12, in hands on activities, presentations, and interaction with the museums exhibits. The camps are on Tuesdays: June 7, June 14, and June 21 and Wednesdays July 13, July 20, and July 27.  The price is $50 per student per day.  This not only includes lunch but also includes something each day that campers will take home to share with family and friends.

Registration is open for the LeMay: America’s Car Museum summer camp.  Children will be able to use the racing simulators and slot car track in the ACM Speed Zone in preparation for a team race on the final day of camp while learning what makes race cars fast, safe, and fuel-efficient through daily challenges. Local race car drivers will also be on hand to showcase their vehicles and equipment used to give tips and advice. The first session is for ages 12-15 and runs July 25-29 from 9 a.m. to 4 p.m. The second session is for ages 8-11 and runs August 8-12 from 9 a.m. to 4 p.m.

Located in Nashville, Tennessee, the Lane Motor Museum opened a new exhibit, “Macchine Italiane: A Tour of Italy’s Motoring Spirit,” which runs through May 22, 2017, featuring more than three-dozen vehicles — race cars, motorcycles and bicycles that demonstrate Italian design and engineering from 1936-2012, with cars that range from the Fiat 500 to the exotic Lamborghini Urraco.

The National Corvette Museum holds its seventh annual “One lap of Kentucky” fund-raising event in October over the course of three weeks: October 11-15, 18-22 and 25-29. The event previously has been a one-day Corvette excursion led by the state troopers, but the event this year is open to enthusiasts of all different years, makes and models, and it is a multi-day drive visiting Kentucky’s significant landmarks.