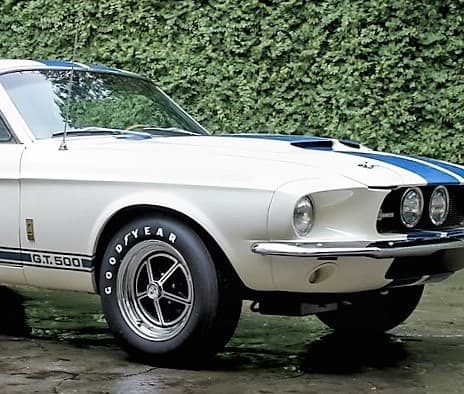 Russo and Steele heads for the West Coast this summer, starting with its fourth annual Newport Beach collector car auction June 10-12. As usual, the sale will be an “auction in the round” event headed by ringmaster Drew Alcazar, who also co-owns the Scottsdale, Arizona, auction house with his wife, Josephine.

The Southern California sale will feature a broad gathering of collector vehicles, vintage to modern, and spanning the affordability range. Russo and Steele specializes in European sports cars and American muscle, but just about anything is likely to run across the high-energy auction arena. Drew Alcazar calls it a “balanced selection.”

This year, Russo and Steele is touting its “wonderful and diverse selection of fabulous Fords” among its featured lots.

2006 Ford GT – No collector car auction is complete these days, it seems, without a low-mileage example of these highly popular and increasingly valuable modern supercars. This is a rare Mark II model, black on black, driven just 2,400 one-owner miles, with a number of desirable features, such as McIntosh audio, forged alloy wheels, painted racing stripes and its original window sticker, which would show just how much these mid-engine sports coupes have soared in value in just a decade.

The ’55 Thunderbird was customized by Chip Foose

2016 Shelby GT350R – Fast forward nearly four decades and we have the latest Ford to wear the Shelby name, featuring the most-powerful naturally aspirated engine ever developed by the Dearborn automaker. Among its advanced features are the first production carbon-fiber wheels and other lightweight components. “A rare, limited-production model, this GT350R stands as one of the world’s best and most sophisticated high-performance cars available today,” Russo and Steele says.

1942 Ford Super Deluxe woody wagon – What could be more appropriate for the Southern California surfer lifestyle than a classic woody wagon? This restored Ford retains its original flathead V8 and three-speed manual transmission, and it reportedly drives nicely. The car is a multiple show winner with beautifully finished wood components inside and out, according to the auctioneers.

1937 Ford Opera custom coupe – The all-steel street rod has been smoothed, filled and shaved, rides on a TCI frame with Mustang II IFS and all modern underpinnings, and is powered by a balanced, blueprinted, and injected LT-1 350 matched to a GM 700R4 overdrive automatic transmission. The custom showpiece is finished in Black Blausberry paint with a leather-and-wool interior, and rides on Budnik wheels.

2000 Ford Mustang SVT Cobra R – Only 300 of these performance Mustangs were built for 2000, and this one has gone only 1,600 miles since it left the factory. Power comes from a 5.8-liter V8 that was conservatively rated at 385 horsepower, with Borla side exhaust, Tremec six-speed transmission, four-piston disc brakes, 21-gallon fuel tank and Recaro seats, all factory original. An all-out performance machine, the SVT Cobra R deleted air conditioning, radio and rear seat, yet it is as capable on the street as it is on the track, with a top speed rating of 186 mph.

The Russo and Steele auction will be held at the Newport Dunes Waterfront Resort in Backbay off Highway 1, adjacent to the Pacific Ocean.

Next on the California agenda for Russo and Steele is its 16th annual Monterey auction at Fisherman’s Wharf from August 18-20 during Pebble Beach Concours d’Elegance week.

For more information about Russo and Steele auctions, visit the company website.