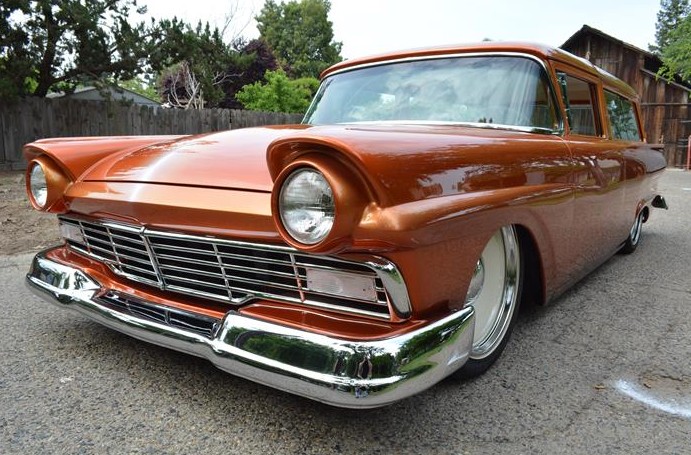 There is really something to be said for a good paint job on a car. When done by a skillful professional, it can breathe much-needed fresh air into a build or give the car its own unique, long-lasting look. But because beauty is in the eye of the beholder, an unusual custom paint job sometimes can make a vehicle difficult to sell.

The Pick of the Day, a 1957 Ford Ranch Wagon, should appeal to most street rod enthusiasts, however, with its lustrous metallic paint in a burnished copper shade.

The car was largely designed and built by its former owner, Eli Lester, the well- known blues guitarist. The wagon was featured in the Winter 2014 issue of Rod and Kulture Magazine, wherein Lester said the paint on the wagon is “a modern-day version of famed Hot Rod painter Gene Winfield’s famous Jade Idol” paint scheme. Painted by Winfield himself, the wagon gets its unique hue from nine different colors, including cinnamon, copper and gold.

According to the listing on ClassicCars.com, the wagon has been shaved, frenched and smoothed by Lester, while the front and rear bumpers were smoothed and narrowed for a tighter fit. The bodywork and paint are highlighted by a custom centerline over the hood and roof, which the listing credits to Edward Chaves.

The theme continues into the interior of the car that was designed by Lester. According to the listing, it is made of stitched cream and copper Leather with new-old-stock steel piping in the seats. The door panels have been reupholstered to match the rest of the interior and the steering wheel has been restored. The original gauge cluster remains in the car, and a guitar amp has been added in the rear of the wagon.

There are 100 photos accompanying this ad, which show an extremely clean and well-finished custom, outside, inside and underneath.

According to the listing, this unique wagon is powered by a 302 cubic inch V8 engine, mated to a C4 automatic transmission, with dual exhaust and coffin mufflers. The wagon’s suspension consists of airbags with custom control arms and brackets that were designed by Gilbert Alemida.

The wagon is offered for $65,000 by a dealer in Garden City, Idaho, who says the owner “put on the rims and tires you see in the pictures, but he still has the wide whitewalls and caps shown in the magazine.”