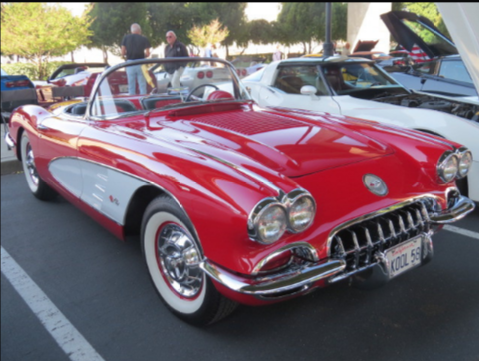 The Auburn Cord Duesenberg Museum in Auburn, Indiana, and the World of Speed Museum in Wilsonville, Oregon, are both participating in the Blue Star Museum Program. The Program was created by the Department of Defense as well as the National Endowment of the Arts, and Blue Star families to provide free admission to the nations active-duty Military personnel and their families, including the National Guard and Reserves, between Memorial Day and Labor Day on September 5. More than 2,000 museums across the country are participating.

The World of Speed Museum kicks off the program by holding a Memorial Day Barbeque from 11 a.m. to 2 p.m. on Monday.

Additionally, the California Automobile Museum in Sacramento, holds its seventh annual Vettes for Vets and American Muscle Car Show on Monday from 9 a.m. to 3 p.m. Registration is still at a discounted rate until the day of the show. Participants are encouraged to dress in a 1940s theme, and free admission will be offered to veterans and active duty military personal.

This Sunday, May 29, the Petersen Automotive Museum holds its monthly Breakfast Club cruise-in at the museum in Los Angeles.

The Gilmore Car Museum plays host to the 30th anniversary of The Classic Experience on June 3-5. The event includes a driving tour, a Grand Classic Concours d’Elegance, and “The Experience” car show, all presented by the Classic Car Club of America Museum. The show features automobiles from 1915-1948.

The Blackhawk Museum in Danville, California, holds its “Day at the Races,” on June 4, which provides registered museum participants with parking next to the paddock at Sonoma Raceway during the Sonoma Historic Motorsports Festival. Other features include use of the Simeraceway hospitality pavilion complex, and the opportunity to do laps in the participant’s own classic or collector vehicle during the SVRA’s lunch session, and a tour of the Simeraceway driving center.

The Owls Head Transportation Museum in Owls Head, Maine, kicks off its 2016 car show season June 4-5. Alongside the car show, open to vehicles pre-1996, the museum intends to demonstrate as many vehicles as possible from their ground vehicle collection, and beat last year’s record of 75.

The Automotive Hall of Fame in Dearborn, Michigan plans Cars and Coffees on June 5, August 27 and October 15.

The Auburn Cord Duesenberg Museum offers cars and coffee on Monday, June 26, at the museum’s education and exhibit plaza.

The California Automobile Museum hosts “Cruise Fest on Fulton Avenue” on September 10. The show is set to include live music, a beer garden and food trucks.

On Sunday, the World of Speed Museum in Wilsonville, Oregon is showing the 100th running of the Indy 500 on the museum’s big screen. The museum is set to open at 9 a.m., and viewing of the race is free with museum admission.

Additionally, the museum offers a “simulator race series.” With the simulator set in Damage mode – meaning cars will behave and sustain injury like a car in real life – participants are given a practice run and qualifying run in the museums race similar on June 30, July 28, August 25, and September 29 from 5:30 p.m. to 8 p.m. Drivers earning top qualifying race times will advance to the finals, held on October 27.

The NCM Motorsports Park in Bowling Green, Kentucky, holds Sportbike Track Time on Saturday and Sunday. May 28-29. The event runs a variation of the “Grand Max Straight,” which provides maximum safety for riders on a tight and technical layout.

The following weekend, guests are invited to “Just Track It” in their car on the full 3.15-mile track. Drivers must be licensed, 16-years or older, have an SA rated helmet, and convertibles must have a roll bar.

The LeMay-America’s Car Museum holds valve cover races this Sunday, May 29. Racers weigh-in and testing starts at 11:30 a.m. followed by races starting at 1 p.m. Registration is available on the museum’s website, it is free to participate and open to all ages.

The museum holds its Wheels and Heels annual Gala on June 4. Casino Royale is the theme and features sultry sounds on the Anderson Plaza, blackjack, or guests can spin the roulette wheel while sipping martinis, shaken not stirred. Funds raised at the Gala will benefit the museums education programs and the Hagerty Education Program at the museum.

The museum holds its fifth annual Vintage Motorcycle Festival, the MEET, on July 30.

The Auburn Cord Duesenberg Museum offers discounted admission to the museum in Auburn, Indiana, to those who drive their classic cars to the museum on July 10 in celebration of Collector Car Appreciation Day.

The World of Speed Museum holds its 2016 Spark Gala on September 17, at the museum in Wilsonville, Oregon. The event is an effort to raise funds for the museum’s educational programs.

The Simeone Museum is holding a Le Mans Choice Demo Day on Saturday. Being demonstrated is a 1970 Porsche 917 LH, 1966 Ford GT40 Mk II, 1964 Shelby Daytona Coupe, and 1929 Stutz Supercharged Le Mans that were part of 27 pre-selected museum cars with Le Mans history that the public was able to vote on.

The next class in a six-part series on the foundations of automotive photography at the Museum is June 4, followed by July 30, September 17 and October 29.

The National Sprint Car Hall of Fame Museum’s series of monthly “Sprint Car 101 forums” will be held at the museum in Knoxville, Iowa, on Saturday, June 11 and July 16.

The next Science Saturday at the National Automobile Museum in Reno, Nevada, focuses June 11 on “Roving Mars,” “Journeying to the moon” on July 9, and “food in space” on August 13.

The Auburn Cord Duesenberg Automobile Museum hosts a number of Children’s Activity Days in June and July. The museums “camp” runs from 10 a.m. to 3 p.m. and immerses campers, ages 10-12, in hands on activities, presentations, and interaction with the museums exhibits. The dates are Tuesdays June 7, June 14, and June 21 and Wednesdays July 13, July 20, and July 27.  The price is $50 per student per day.  This not only includes lunch but also includes something each day that campers will take home to share with family and friends.

Registration is open for the LeMay: America’s Car Museum summer camp.  Children will be able to use the racing simulators and slot car track in the ACM Speed Zone in preparation for a team race on the final day of camp while learning what makes race cars fast, safe, and fuel-efficient through daily challenges. Local race car drivers will also be on hand to showcase their vehicles and equipment used to give tips and advice. The first session is for ages 12-15 and duns July 25-29 from 9 a.m. to 4 p.m. The second session is for ages 8-11 and runs August 8-12 from 9 a.m. to 4 p.m.

Located in Nashville, Tennessee, the Lane Motor Museum opened a new exhibit, “Macchine Italiane: A Tour of Italy’s Motoring Spirit,” which runs through May 22, 2017, featuring more than three-dozen vehicles — race cars, motorcycles and bicycles that demonstrate Italian design and engineering from 1936-2012, with cars that range from the Fiat 500 to the exotic Lamborghini Urraco.

The National Corvette Museum holds its seventh annual “One lap of Kentucky” fund-raising event in October over the course of three weeks: October 11-15, 18-22 and 25-29. The event previously has been a one-day Corvette excursion led by the state troopers, but the event this year is open to enthusiasts of all different years, makes and models, and it is a multi-day drive visiting Kentucky’s significant landmarks.