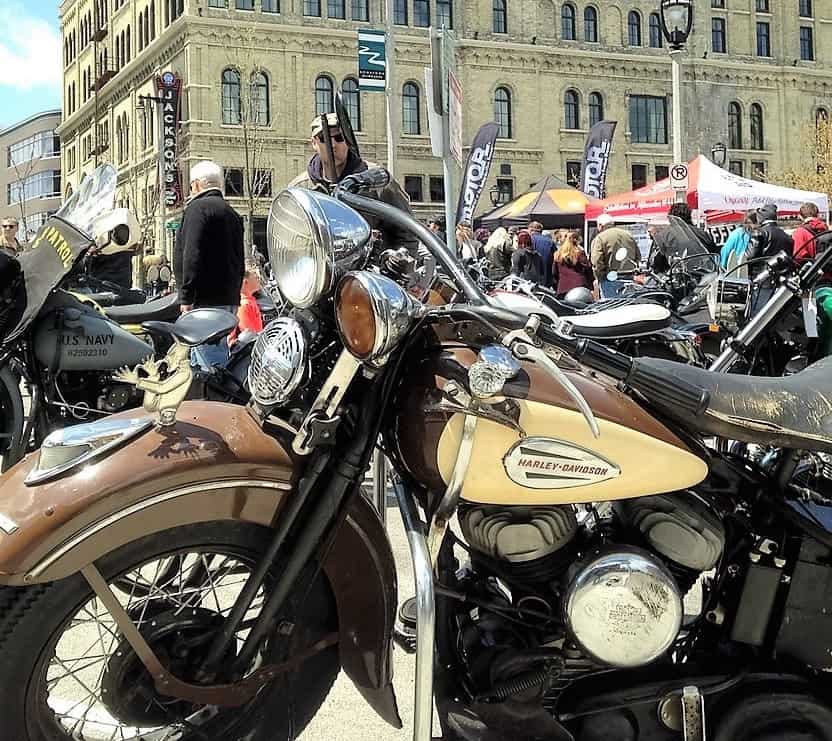 An estimated 2,500 motorcyclists braved brisk weather May 14-15 for the second annual Brewtown Rumble at the historic Pabst Brewery in Milwaukee, Wisconsin. The ride-in show featured classic bikes of all makes alongside bands, bratwurst and cold Blue Ribbon beer in a setting reminiscent of a Bavarian castle.

Although famously known as the hometown of Harley-Davidson motorcycles – and now Royal Enfield North America – the Milwaukee bike scene is as varied and inclusive as the field of this show. Hogs mixed with Hondas, and Triumph twins queued with Ducati Desmos. Rare marques like Moto Morini, Laverda and Greeves shared space with custom builds and the occasional hot rod.

The weekend’s events kicked off Saturday night with a pre-party held at the Harley-Davidson Museum in downtown Milwaukee. The industrial-themed campus regularly hosts bike gatherings at its two onsite restaurants, Motor and Café Racer.

Coinciding with the pre-party was The Mad Max Motorcycle Run, a rolling tribute to the post-apocalyptic cult movie franchise. More than 100 costumed riders braved 40-degree weather to ride to the museum. Those not up to the cold were welcome to hop aboard the group’s “War Bus” to the festivities. This same group also holds a mid-summer “Evel Knievel Run” which brings out hundreds of riders in white satin jumpsuits and capes on a day-long pub ride.

The judged show drew an eclectic mix of about 75 time-warp preservation bikes and custom builds, while the cobblestone side streets of the brewery provided an incredible array of cycles ridden in for the event.’’

Hagerty Insurance expanded its focus on the growing collector motorcycle scene by conducting its popular Youth Judging Program at the Rumble. The winning bike was a 1958 Triumph T100 owned by 18-year old Anthony “A.J.” Pozza, a senior at Mukwonago High School. Anthony has owned the Triumph for a couple of years and enjoys working on the bike with his dad, Steve.

All proceeds from the Brewtown Rumble go to fund Build, a Milwaukee-based mechanical mentoring program. In the program, area high school teams learn mechanical skills by building Honda CB175 race bikes and competing with them against other schools at the nearby Road America racecourse. It’s a novel way to bring experienced mentors in touch with high school kids over a shared love of motorcycles.