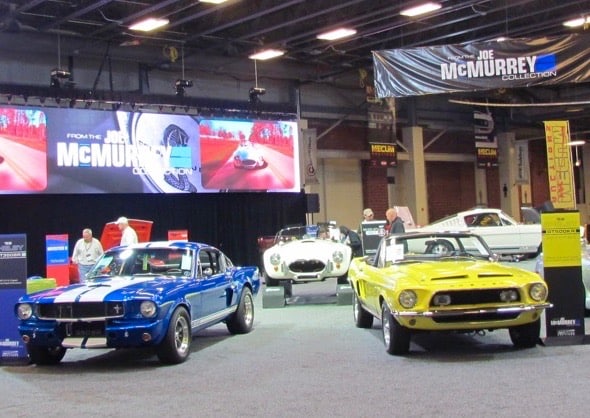 One of the benefits of staging a collector car auction at a venue such as the Indiana State Fairgrounds is the plethora of buildings in which to display the available vehicles. With so much room, cars can be properly displayed, especially when a consignor brings a significant collection to sell.

Among the more than a dozen collectors consigning multiple cars to the Mecum Auctions event was Joe McMurrey, a 67-year-old Texan with a stunning array of cars, most of them with a direct connection to his Texas neighbor (hey, 50 miles away qualifies as next door in Texas) and good friend, the late Carroll Shelby. Among the things McMurrey wasn’t selling is his Terlingua Racing team certificate that Shelby signed for him back in 1963.

“He put America on the world stage, not just the American stage,” McMurrey said in praise of his long-time friend.

Actually, Shelby wasn’t involved in the creation of the Willys, but he prevented McMurrey from ruining it.

McMurrey bought the Willys primarily to get the rare Ford 427 SOHC “Cammer” engine that propelled it. McMurrey planned to remove the engine until Shelby told him not to, to leave the car just the way it was.

“Carroll said, ‘This is history. Don’t do anything’,” McMurrey recalled with gratitude.

McMurrey also said that of all his cars — his collection once numbered 55 but after the auction will be down to fewer than 20 — the Willys was Shelby’s favorite.

McMurrey also was selling a Hemi Road Runner, supercharged ’57 T’bird, the Boydster II hot rod, a Z06 split-window Corvette and a Kar Kraft-built Boss 302 Trans Am race car. He said that parting with so many cars at once can be difficult emotionally, but he’s found that selling one car at a time can be disappointing financially.

He sold a 289 Cobra at another auction last year but didn’t get as much as he expected. Selling so many at once — going “all in” as he put it — his expectation is that while some might not bring as much as he wants, others will bring more than he might have anticipated and the bottom line at the end of the sale will make it all worthwhile.

Plus, he’ll have the special 99-page printed catalog Mecum did on his collection, and the memories of all the people who enjoyed seeing his cars, who asked him about their history, and who thanked him for sharing them now with new owners.