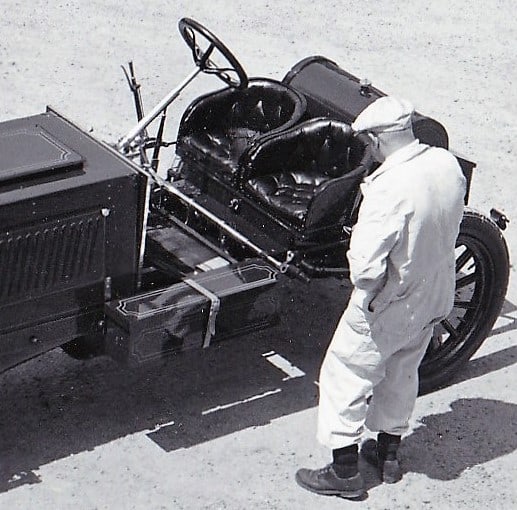 D. Napier & Son Limited of Great Britain gained notoriety for automobile manufacturing through racing, specifically their 1902 win in the Gordon Bennett Cup, a cross-country race that ran from Paris to Innsbruck, Austria. The following year, the race would have been brought to England because of the Napier victory, but because England prohibited motor racing on public roads at the time, the race was moved to Ireland.

Napier painted its race cars green in honor of the host country, and so was born the famous competition color British Racing Green. The 1903 Gordon Bennett Cup was won by a German team in a Mercedes.

The race was named for James Gordon Bennett, Jr., publisher of the New York Herald. A passionate champion of sporting endeavors, his many accomplishments include organizing both the first polo match and the first tennis match held in the United States. He also established the Gordon Bennett Cup for international yachting, balloon racing and the fledgling sport of international automobile racing.

Napiers were well-built and expensive cars, rivaling Rolls-Royce at the time. This Napier race car was built in 1903 and raced at the Elimination Trials held on the Isle of Man to select the British team for the 1904 Gordon Bennett Cup race. But the car was crashed, breaking the front axle, and it did not make the team.

As was the custom at the time, Napier decommissioned its race cars after the factory was through with them, and sold them to the public. It is thought that this car was imported into the United States sometime prior to 1912 by H. M. Bater, a mechanic who was in the employ of The Napier Motor Company of America of Jamaica Plain, Massachusetts, a suburb of Boston.

Bater was responsible for importing a number of cars into the country. One of his customers, and one of Napier’s best American customers, was A.W. Erickson of Swamscott, Massachusetts.

This photo shows the car in the 1950s just after restoration by Frank Johnson, who is seen in the photo, on behalf of the owner George Waterman, one of the preeminent car collectors of the time. Waterman found both a 1906 Napier touring car and the 1903 racer in the Erickson family carriage house around 1940, and purchased both of them.

The cars survive to this day, and the 1903 Napier racer now resides in the marvelous Louwman Museum in The Hague, Netherlands.