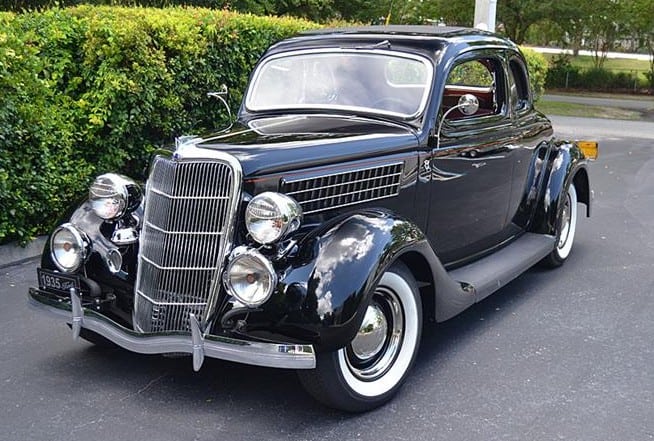 In 1935, Ford made the claim that its new car, the Model 48, had “greater beauty, greater comfort and greater safety” than Ford’s previous models. The Model 48 was essentially an update of the Model 40A, but it offered more than 15 different versions with dozens of options, all variations featuring Ford’s dependable V8.

The result of their upgrades is this Pick of the Day, a 1935 Ford Model 48 resto-mod 5-window coupe. Ford’s reputation “for speed and appearance” made the Model 48 “the first choice when choosing a candidate for upgrading,” according to the Mount Dora, Florida, dealer listing the car for sale on ClassicCars.com.

In addition to the 1935’s streamlined appearance, it lost the previous model’s V-shaped grille while fender outlines were more rounded, and the louvered hood gained three bright-chrome horizontal strips. The seller of this resto-mod says the original car’s windshield was “designed to appear ‘more sloped’ which resulted in making the car look ‘faster.’”

Fifteen different versions of the model 48 were offered with the standard two-door like this one being the most popular coupe in sales. The seller notes that the 1935’s 5-window coupes were roomier, had plenty of interior and trunk space, and “lots of room for something besides ’85-90’ HP under the hood.”

The Model 48 listed on ClassicCars.com benefited from a total restoration and custom build by Mario Dischiavi, a graduate of the Pratt Institute and renown Corvette specialist with more than 50 years of experience; Dischiavi is considered one of the best hot rod and restoration specialists on the East Coast, the seller notes.

Powering the Model 48 is a Chevrolet 350 crate motor with a General Motors 700R overdrive transmission with Lokar overdrive display on the automatic floor shift. The engine has been fitted with custom headers and dual exhaust, and runs through a custom balanced driveshaft.

The restoration and custom upgrades for the Model 48 came to about $100,000, which is confirmed by receipts, according to the seller, who is asking $96,000 for this good-looking retro-mod Ford.