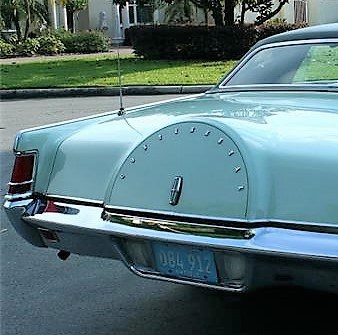 The 1971 Lincoln Continental has been resprayed its factory color, Light Mint Green

I was kind of intrigued by Hagerty’s graph that appeared here Monday showing the fastest-growing cars by number offered at auction during the past year. Oh, most were the expected Porsches 911s and late-model Mustangs, Camaros and Challengers. But how about number five on the hit parade: 1971-79 Lincoln Continentals. That was kind of unexpected.

Then I stumbled on the Pick of the Day, a 1971 Lincoln Continental Mark III listed on ClassicCars.com, and I got turned on. This granddaddy cruiser looks pretty sharp with its hideaway headlights and a hood that’s as long as a flight deck.

Naturally, the dealer selling this “personal luxury car” is located in the retirement haven of Lakeland, Florida. The Mark III apparently has been a southern car its whole life, the seller notes, and shows no sign of rust or deterioration.

Despite their massive size, these Lincolns are nice driving cars, definitely a notch above their contemporaries. I know this because my future father-in-law used to lease these yachts, and my future wife and I would get to drive them. They were always red with a white vinyl top and white leather interior, and we probably looked pretty absurd driving around in our hippy garb.

This Lincoln is in the more-subdued hue of Light Mint Green that has been re-applied with a dual-stage repaint to original, the dealer says. The dark-green vinyl top and matching cloth-and-leather interior are in good original condition on this well-preserved 71,000-mile car, the dealer adds. Chrome, stainless trim and interior wood accents are also in good shape.

The Lincoln’s interior is loaded with luxury features

These cars were loaded with accessories, and everything works, the dealer says, including the air conditioning and AM/FM radio with power antennae.

The Lincoln is powered by a supersized 460 cid V8 with four-barrel carburetor and automatic transmission, and with recent freshening and newer whitewall tires, it’s ready for a cruise down the coastline. Tune in the oldies station and relive the magic.

The price seems reasonable at $18,500 for what has apparently become an auction favorite. Just make sure your garage is big enough.