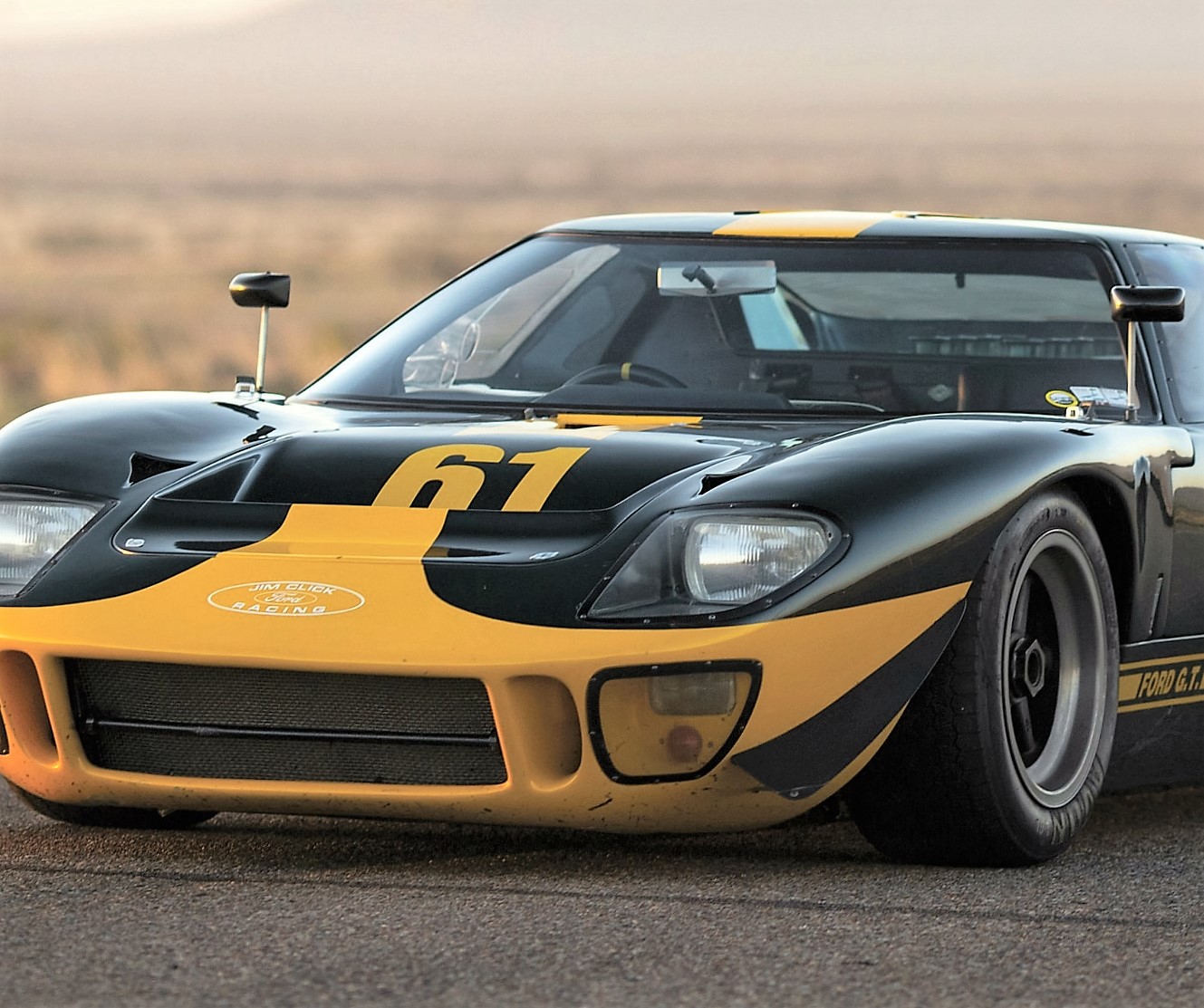 A spectacular group of six competition Fords and Shelbys from the famed Jim Click Ford Performance Collection has been announced by RM Sotheby’s for its annual Monterey, California, auction in August during Pebble Beach Concours d’Elegance week.

The performance collection has been amassed during the past 25 years by Jim Click Jr., a third-generation automotive businessman with 16 dealerships in Arizona and California. Click’s top-echelon cars are familiar to vintage-racing enthusiasts across the country and the group slated for Monterey “comprises six outstanding vehicles, each typifying the very best of their individual breed,” RM Sotheby’s said in a news release.

“The cars that make up the collection are truly some of the best examples on the planet,” Donnie Gould, car specialist at RM Sotheby’s, said in the release. “Jim Click is an avid race driver, a genuine enthusiast, and a big proponent for jumping behind the wheel and using cars as they’re intended. He’s personally driven all the vehicles in his collection – joined by co-driver Mike McGovern – and has been a frontrunner in every race he’s competed in, building on their race-winning heritage.”

Click is downsizing his collection to give others the opportunity to experience their excellence on the track, said the Tucson, Arizona, businessman.

“It’s time for me to let someone else enjoy the cars like I have,” Click said. “They are fantastic cars – thoroughly prepared to the extent that we’ve never had a safety issue. Whoever ends up owning them, you’re in for a truly exciting ride. I hope you have at least half as much fun with these cars as I have had over these last 25 years.”

Highlighting the auction cars is the 1964 Shelby 289 “Competition” Cobra, CSX 2473, considered one of the world’s winningest Cobras, mostly driven by renowned SCCA champion Don Roberts of Glendale, Arizona, who started racking up victories with the Cobra in 1966 and continued his racetrack dominance through the decades, including with the car under Click’s ownership.

“CSX 2473 is, without question, one of the most-successful 289 Competition Cobras in history, and it’s certainly fitting to offer it in Monterey, a place where it has enjoyed tremendous success over the years,” said Alexander Weaver, car specialist at RM Sotheby’s. “It features an unrivaled period racing history with countless wins to its name, and significantly, has not claimed a single DNF in its illustrious career. Its provenance is further elevated by its long and successful association with racing great Don Roberts.”

Roberts has served for a number of years as mechanic, restorer and caretaker for Click’s race cars. Gould noted that each of the six cars coming to auction “has been kept in top racing form, thanks to none other than the legendary Don Roberts, who made them extremely fast and extremely safe. They’re so dialed in, it’s amazing.”

RM Sotheby’s values the exceptional Cobra at a premium $2.2 million to $2.6 million.

The other 1964 289 Cobra, number CSX2326, may not have the glorious provenance of the Don Roberts Cobra, but it is ready to engage in vintage racing at the same high level, according to RM Sotheby’s. Click owned this car three different times, restored it as a vintage race car, and it has had a rich history in historic competition. The auction value is set at $1 million to $1.4 million.

The most-prized racer of the collection is the 1966 Ford GT40, one of just 31 Mk 1 road cars and one of seven originally retained by Ford for promotions and demonstrations. After passing through a chain of enthusiast owners, including Australian race driver Bob Stillwell, chassis P/1061 was acquired by Click in 1992, after which he actively vintage raced the car for years. The value of the GT40 is estimated by the auction house at $3.75 million to $4.25 million.

Gould said that the GT40 is another one of Click’s cars that has benefited from Roberts’ ministrations.

“The key to this car is that it has been ‘massaged’ over the past 35 years to make it a fierce competitor,” he said. “It’s another example of a car within the Click collection that Don Roberts has worked his magic on, creating one of the best GT40s that anyone could ever acquire and put on the race track. A true thrill to drive.”

The 1966 Shelby GT350 is the 1970 SCCA B-production Southern Pacific Division Champion, and yet another one of Click’s cars with a close connection with Roberts – it was both prepared and raced by Roberts in period with strong results. The car’s estimated value is $350,000 to $400,000.

The 1969 and 1970 Kar Kraft Mustang Boss 302 Trans Am racers each boast rich provenance. The 1969 Mustang was a Shelby team car driven by some of the greats of that era, including Dan Gurney, Pete Revson, George Follmer and A.J. Foyt. The 1970 car was the Bud Moore team car and successfully driven by Peter Gregg in the 1971 season to third overall in the championship. Each Boss 302 is valued at $1 million to $1.3 million.