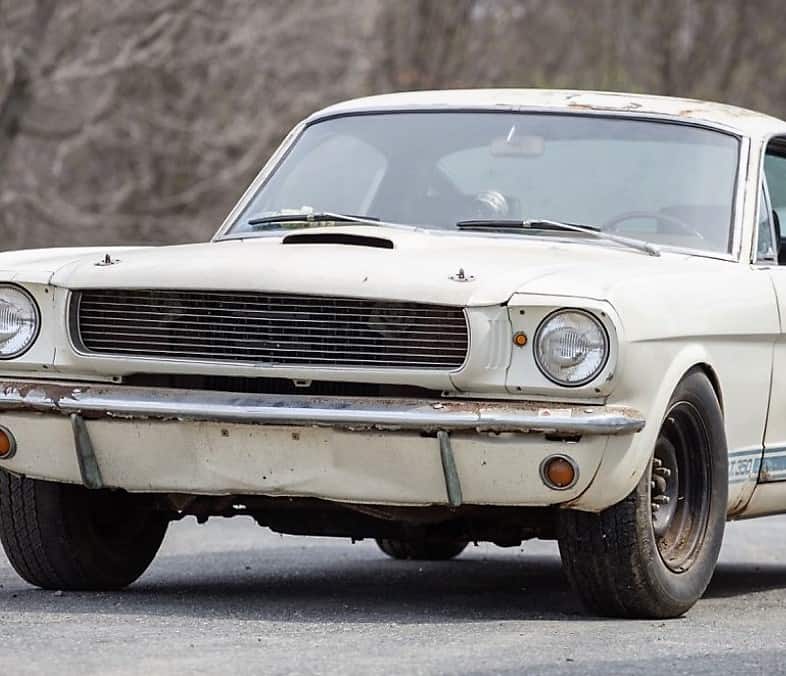 A secret “barn-find” 1966 Ford Mustang Shelby GT350, hidden away for 40 years by its original owner and unknown even to the Shelby American Registry, goes to auction June 5 during Bonhams’ sale in Greenwich, Connecticut.

The Shelby will be offered “as-found” and without reserve by Bonhams, which values the fastback coupe at $80,000 to $120,000, which seems like a modest goal considering the rising values of GT350s in even the most-ratty condition.

The performance car was originally used by a Framingham, Massachusetts, Ford dealer for demonstration and competition before its original owner drove it into storage in 1976 with just 55,000 miles on its odometer, according to Bonhams. It remained there untouched until it was recently revealed and consigned to auction.

“Even more fascinating is that this car is not found on the Shelby America Register since the owner never told anyone about it, making this revelation even more noteworthy,” Bonhams said in a news release.

Neither the identity of the owner nor the circumstances of the car’s recovery were revealed by Bonhams.

The car was one of a small number of so-called “carryover’ GT350s with the Shelby performance parts of the ’65 models but with the new styling of the 1966 Mustang-based cars, Bonhams said in the news release. Since it carries a 1965 VIN, the car would be eligible for track events limited to 1965 and older cars, which increases its value.

“The GT350 is one of the most legendary cars in American motor history and this rare example surely represents one of the most unique opportunities for enthusiasts in decades,” Bonhams said.

In an expansive gallery of photos on Bonhams’ website, the Shelby looks intact but shabby after its four-decade slumber, with some rust issues as well. There’s no word as to whether the car has been started. It is shown standing on a set of incorrect steel wheels, though Bonhams says the correct Shelby wheels come with the sale, as well as full documentation.

“The car is in marvelous time-capsule condition and includes its five original Cragar Shelby mag wheels as well as every service receipt and document from new, including the bill of sale, original handbook and Shelby literature,” Bonhams said.

The Bonhams’ auction will be held at Roger Sherman Baldwin Park in conjunction with the prestigious Greenwich Concours d’Elegance. For more information, visit the auction website.