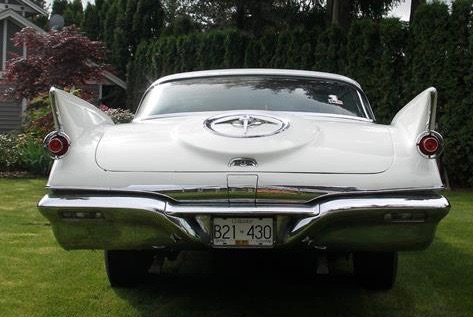 ‘I was the crown jewel of Chrysler back in the day,” is the way the advertisement on ClassicCars.com starts for the Pick of the Day, a 1961 Chrysler Imperial for sale in Abbotsford, British Columbia.

“They did not build a better car and the mighty Cadillac trembled when I drove past,” the ad continues in its first-person — or is it first-car? — style.

Read along and you learn that the car was inherited more than 20 years ago from the current owner’s grandfather, who bought the car when it was just a year old. The ad notes that the car is being sold because the owner lives overseas and has been told the car no longer can be stored in its current garage.

“My current owner’s grandfather bought me when I was one year old and I have been garage stored since then (for 55 years!),” the ad notes. “Since my current owner has had me I have not seen one drop of rain nor one bit of snow. I have only been driven in the summer time for short trips and have probably averaged 200 miles per year since 1994. I only have 71,908 original miles on my odometer.”

However, the car admits, “Although I am not showing my age and I look absolutely amazing, it is time for a facelift. It is time to pull my body parts off and give me a good scrubbing down to my bare parts. I do not have a lot of rust but I do have some. I could also use a little work on my interior.”

Photos in the ad show a car that looks very well preserved, though with cracks showing in the seating surfaces.

“If you do a little work on me I could easily look like I did back in 1961 when I rolled off the assembly line with my other 900 or so brothers,” the car promises.

The car notes it was “fully loaded” when it rolled off the line — power steering, power windows, power brakes, power seats, “all of which still work.”

The ad says the big-block 413 cid V8 engine is topped by a two-barrel carb and linked to a push-button automatic transmission and the car floats along effortlessly. “I just keep going and going.”

“My dashboard electronics were also rebuilt a few years ago and the truth is everything of mine works, right down to the transistor AM radio.

“I also still have my original owner’s manual as well as my service manual and a couple of shop manuals. I even have a few extra parts that I have been collected over the years.”