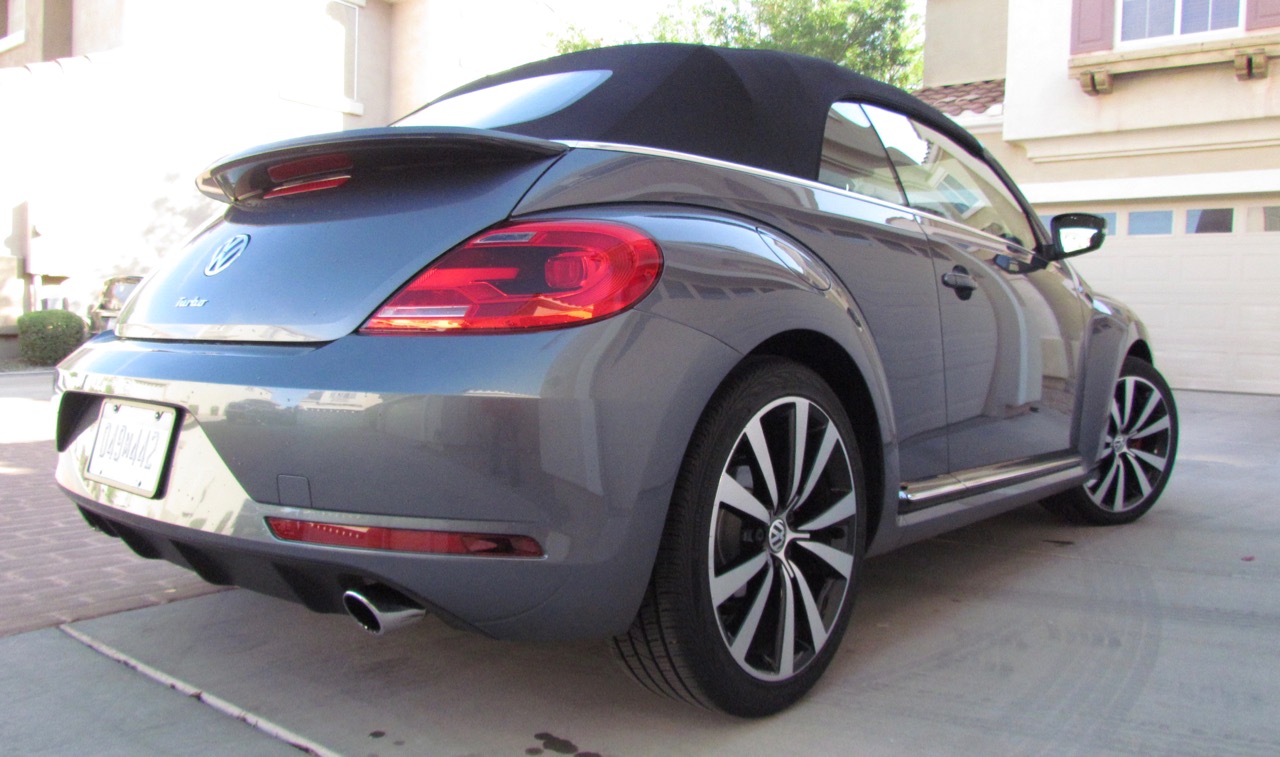 I really wanted to like the 2016 Volkswagen Beetle convertible as much as my grandchildren did, and they loved riding in the car with just the sky above their heads.

But there’s more to this business of critiquing a vehicle than enjoying the fact that its roof goes up and down, or even that it looks pretty cool in its Platinum Gray Metallic paint. Squint and you can see some Porsche 356 in the new Beetle’s styling. 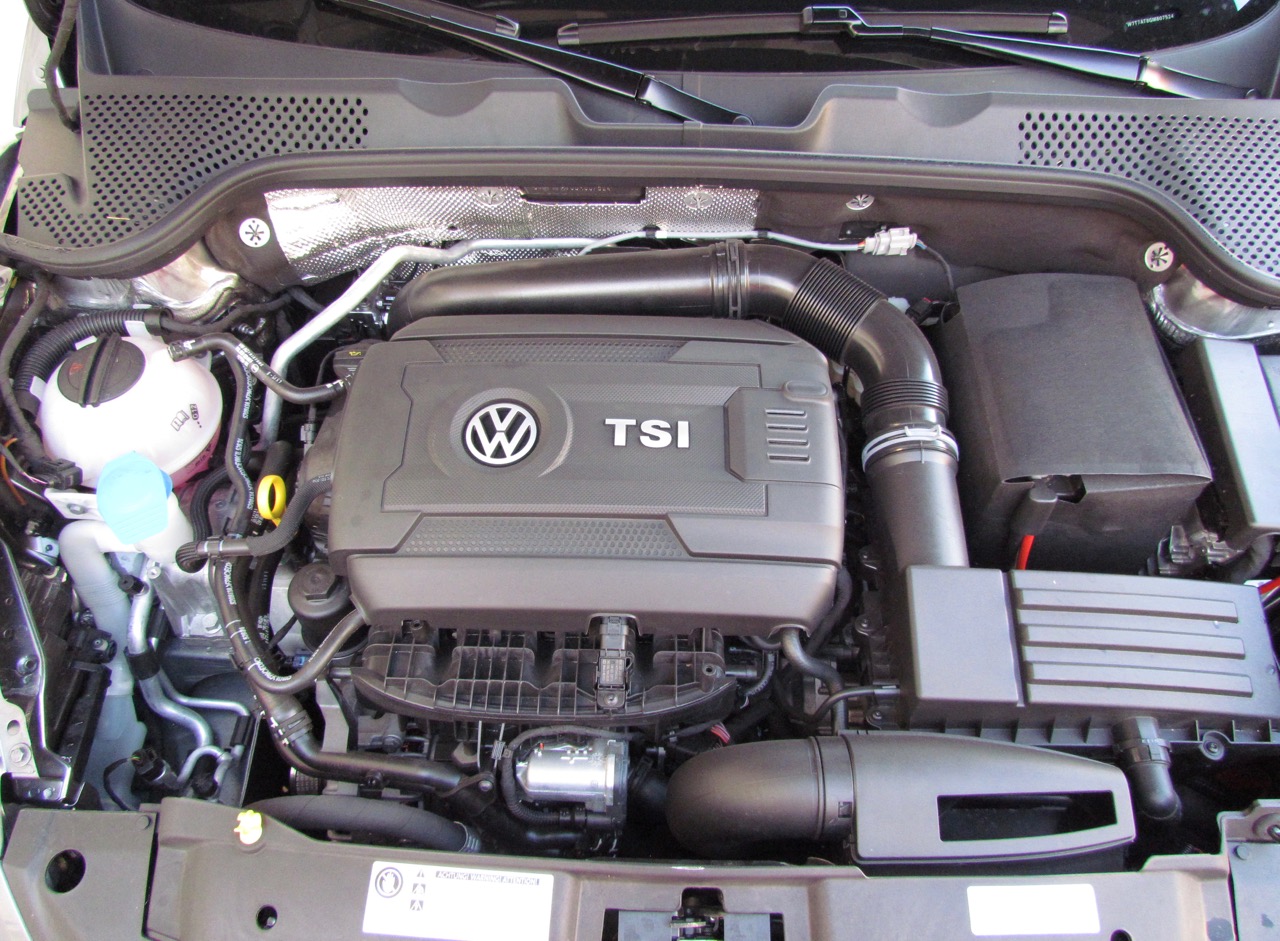 And there’s even a turbocharged engine beneath its hood — albeit at the front, not the rear of the car. The turbo boosts the engine nicely, though I notice on VW’s technical specifications sheet that to enjoy the full 210 horsepower and 207 pound-feet of torque, you need to fill the tank with premium unleaded fuel, even though the recommended fuel is regular unleaded. (Come, on, VW, haven’t you learned your lesson about being straightforward about such things?)

The engine is peppy, though there’s more turbo lag than we’ve come to expect in modern engines. Once the boost becomes accessible, there’s a tendency for the all-season Continental tires to lose their grip and simply spin while seeking grip on the pavement.

Our test car was equipped with VW’s six-speed DSG (dual-clutch) automatic transmission. Driving enthusiasts will opt for the six-speed manual.

The test car was an R-Line SEL, which means top of the line for VW Beetle cabriolets. VW says R-Line cars get such things as sports-tuned suspension, but in quick maneuvers, I experienced way more body lean than I would ever expect from any sort of sports car.

Perhaps my expectations were simply too high. R-Line cars do get 23mm anti-roll bars up front compared with 22mm in the standard setup. (Does one mm really make much difference?) It also gets inch-larger front brake discs, and red-painted calipers at all four corners. R-Line cars also have XDS cross-differential limited-slip that’s supposed to minimize any wheel slip and enhance traction.

Open the trunk and there’s a wind blocker nicely packaged in a sort of shelf above the cargo area, which was pretty much filled by a “convertible top cover” (boot) designed to hide the power convertible top when it’s folded behind the second row of seats. Inside the boot are numbers, which we took to be the steps needed to install the top, which I tried to do — three times. Without success.

Since I needed the trunk for a suitcase, computer and camera bags, and eventually for a grandson’s baseball gear bag, I simply removed the boot from the car and left it in the house, wondering why VW even bothers with such a thing. After all, contemporary convertibles no longer employ separate boots; modern convertible tops have built-in tonneau covers that tidy up the car’s looks when the tops are down.

Later, I checked the owner’s manual. Installing the boot is an eight-step process (though the numbers on the boot only go from 1 through 4). And it’s a six-step process to remove the boot once you get it in place.

On the other hand, the convertible top can be powered up or down while the vehicle is in motion, and at speeds up to 31 miles per hour. Pity that once it’s down, it’s this old-fashioned stack of metal and cloth ruining the car’s profile.

The 2016 VW Beetle convertible starts at $25,490 for the 1.8T S model. There are five steps from there to the version we’ve been driving, the R-Line SEL which comes with such features as leather-covered sport seats, navigation, VW Car-Net Ap-Connect, 19-inch “Tornado” aluminum alloy wheels, Bi-Xenon headlights, blind-spot mirrors with rear-traffic alert, and all the other features standard on the less-expensive models.

From the 1.8T SEL on up, those features include Fender premium audio, a terrific sound system even in a convertible with the top down.

Another thing I really liked was fuel economy. The R-Line SEL is rated at 23 mpg in town and 31 on the highway, 26 overall, but for our week in the car we averaged better than 30 mpg.