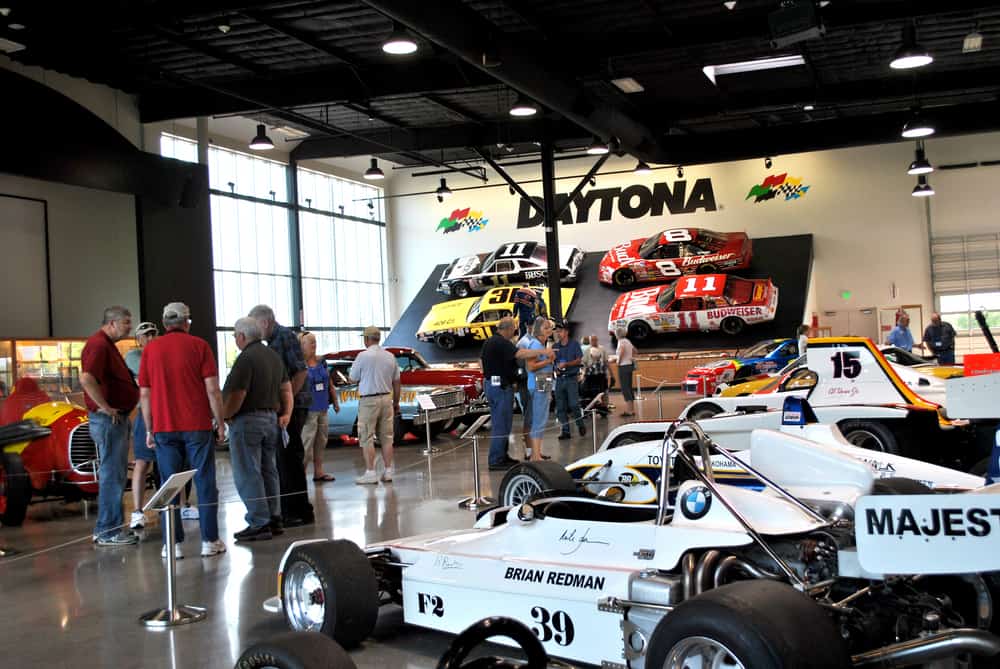 The exhibit will include memorabilia from some of the Pacific Northwest’s greatest drivers and car engineers, inclduing Art Pollard, Len Sutton, Rolla Volstedt and Parker Johnstone. Suits, helmets, shoes, gloves, models and photos will be featured, along with World of Speed’s complete collection of Indianapolis 500 race programs.

Rounding out the exhibit, the video wall will be transformed into a dynamic display featuring images of all past 500 winners.

On display through September 15, 2016, the Auburn Cord Duesenberg Museum’s traveling exhibit, “The Women Workers of the Auburn Automobile Company,” will be home at the museum in Auburn, Indiana. The exhibit comprises photographs of women working in the Auburn factories and has been traveling around the community for the past 12 months in an effort that focuses on having some of the women in the photographs identified so their legacies could be preserved.

Recently, the museum also received a trailer full of literature, films and ephemera, mostly about the world of racing. The collection, amassed by former publisher of Speed Age, Don O’Reilly, was donated to the museum.

The Simeone Automotive Museum in Philadelphia opens its 18-car tribute to Subaru on Saturday. The exhibit includes both road-going and competition cars and it runs through May 1. May 1 is Saturday. It’s only open for one day?

Running April 23 through September 11, the California Automobile Museum in Sacramento is a new exhibit, “The Pickup Truck: where utility meets the everyday.” The exhibit looks at the transition of the American pickup truck from a work vehicle to a personal vehicle with examples from the 1920s through modern day.

The National Corvette Museum in Bowling Green, Kentucky, plans its annual C4 Gathering at the museum, May 12-14. The gathering features seminars, tours, and other actives that will be specific and appeal to models produced between 1984 and 1996. Online registration is available through the museums website.

The National Corvette Museum hosts the Michelin NCM Bash on April 28-30. Attendees can get up close to the next model-year Corvette as well as hear from the engineers and designers of the car.

On June 18-19, the museum hosts a live feed of the 24 Hours of Le Mans race in the museum theater with live timing and scoring along with refreshments and hourly updates from the Corvette race team. Registration is $100.

The final class in the Owls Head Transportation Museum’s 2016 Winter Education Series is set for April 30 at 1 p.m. at the museum, located in Owls Head, Maine. The discussion will focus on the Lafayette Escadrille, with historian, writer and museum professional, Mark Wilkins walking guests through the history of this group of pilots.

The Gilmore Car Museum holds the next class in its 2016 lecture series, “The Earliest and Oldest Automobiles Dealerships in Michigan” set for May 1.

The next speaker-series discussion at the Blackhawk Museum is scheduled May 7 with Allen Grant discussing the 1965 Shelby Team Driver.

On May 7 the California Automobile Museum offers guests the opportunity to learn to drive a Ford Model T. The following day, the museum hosts a Mother’s Day tea and talk on May 8.

The next class in a six-part series on the foundations of automotive photography at Simeone Museum is June 4, followed by July 30, September 17 and October 29.   The museum has announced it was awarded the AACA Plaque Award in recognition of outstanding achievement in the preservation of automotive history.

The National Sprint Car Hall of Fame Museum’s series of monthly “Sprint Car 101 forums” has scheduled the following events: “An Evening with Duane ‘Pancho’ Carter and Steve Stapp to benefit Racers at Rest,” hosted by Brian Gerster on May 5 at the American Legion Post in Speedway, Indiana. Remaining forums held at the museum in Knoxville, Iowa, on May 21, June 11 and July 16.

Model T Drivers’ Ed registration is open at the LeMay Marymount in Tacoma, Washington. The next class will be May 14, followed by June 4, July 9, August 13 and September 10.

The Auburn Cord Duesenberg Automobile Museum hosts a number of Children’s Activity Days through June and July. The museums “camp” runs from 10:00 a.m. to 3:00 p.m. and immerses campers, ages 10-12, in hands on activities, presentations, and interaction with the museums exhibits. The dates are Tuesdays June 7, June 14, and June 21 and Wednesdays July 13, July 20, and July 27.  The price is $50 per student per day.  This not only includes lunch but also includes something each day that campers will take home to share with family and friends.