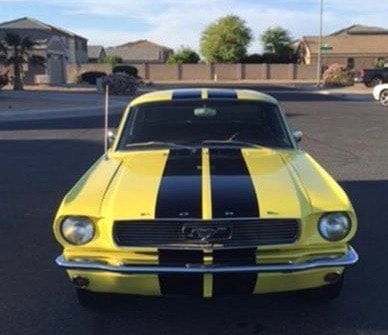 What caught my eye were the yellow color and black racing stripe on this 1966 Ford Mustang. What got it promoted to Pick of the Day was the story that was part of the advertisement on ClassicCars.com.

“I am the third owner of the car. I have had the car for 15 years and the entire time it has been garaged and well maintained. The car runs great with no issues and has never had any issues being an everyday car.

“I drove the car to ASU (Arizona State University) during my college years every day.

“The car was painted last year and Cragar wheels and BF Goodrich tires were installed.

“There is absolutely no rust in the car. This is a straight 6-cylinder with the original engine with 276,000 miles on it. Original transmission.

The car is located in El Mirage, a western suburb of Phoenix. In addition to its original six-cylinder engine, it has an automatic transmission, black vinyl bucket seats, a CD player, custom stereo, power brakes and tinted windows. The seller says the exterior has been restored and the interior “partially” restored.

The 18 photos that are part of the advertisement show an immaculate vehicle, inside and out, under the hood and in the trunk.