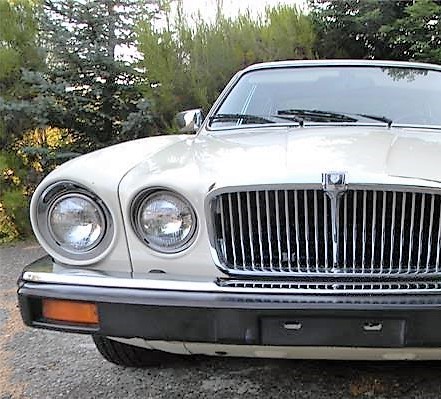 Say you are looking for a classic car in which you can take the family along. You still want to participate in the hobby, but you need a car with at least four seats.

If your taste tends towards classic British cars, there are few better choices than a Series 3 Jaguar XJ6, a car that is comfortable, was well-developed by the factory, has the required four seats, and is most definitely a classic.

The Pick of the Day is one of my favorite sedans, a 1987 Jaguar XJ6, with this one for sale by its original owner in San Rafael, California.

The Jaguar XJ6 was the first of the modernized sports sedans from the automaker, offering amazing luxury and stunning styling, combined with elegant styling. It contained a lot of what Bentley cars boasted at the time, but at a price that was more affordable.

That is not to say that the XJ6 was a cheap car when new. These cars were priced about the same as a Mercedes-Benz S Class or a BMW 7-Series, but they offered luxury accoutrements that their competitors from Germany lacked. Fitted with Connolly leather seats, Winton wool carpets, and as much wood as a British country club, the interiors are like driving around in an English manor house.

Combined with that was exterior styling that was universally hailed as one of the best-looking sedans of its day. The XJ6 is also powered by Jaguar’s legendary XJ straight-six engine, a powerplant that has Le Mans-winning heritage, being basically the same engine that powered the C- and D-types, along with the XK-E.

Series 3 cars like this one listed on ClassicCars.com benefited from a redesign by Pininfarina, which updated the car but still conveyed its original elegance in a more sporty-looking package.

A lot has been made of Jaguar cars’ unreliability, but these Series 3 cars were very well-sorted during Jaguar managing director Sir John Egan’s drive towards quality, and they were some of the best Jaguars produced up to that time.

According to the seller, this is a true one owner car that has been properly maintained. It wears correct Pirelli Tires and has had its saddle leather interior recently refurbished. The exterior is said to be in perfect condition with no rust ever.

The owner states that the car currently has 130,000. miles, is in excellent running condition and looks like a new car.

At the asking price of only $5,900, this XJ6 is a real bargain in today’s market and looks to be a car that could be driven and shown for years to come.