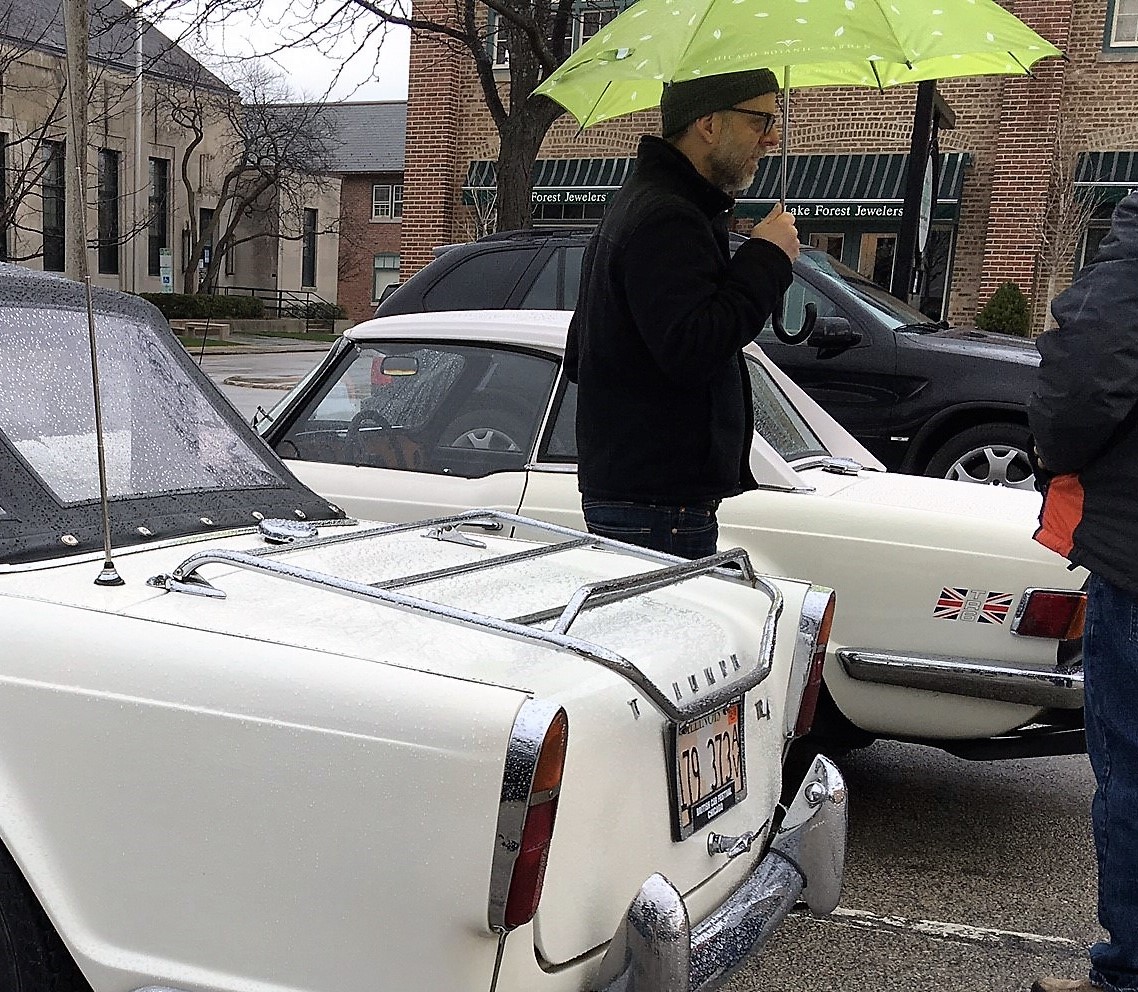 In the midst of on-again, off-again spring weather in the Midwest, members of the Chicago-based classic car group Fuelfed braved 30-degree temperatures and a wintry drizzle to hold their season-opening driving event in the northern suburb of Lake Forest, Illinois.

Club members displayed their American and European cars in “The Fuelfed Open,” an informal gathering that was supposed to shake off winter’s chill and help them reconnect for the upcoming driving season.

About 24 classics, ranging from a pair of white Triumph sports cars to an Alfa Romeo Montreal to a ’51 Chevy Deluxe Coupe, and many more modern exotics gathered near the village square as owners commiserated under umbrellas and clutched hot coffee to fend off the brisk weather.

“Probably the nastiest weather in the history of Fuelfed events and yet most everyone stuck it out and chatted it up until 11 a.m.,” said Fuelfed founder Brian Hughes. “But that’s Chicago, I guess.”

That determined enthusiasm is the driving force behind Fuelfed, which was formed in 2010 as a loose-knit group of classic European car enthusiasts holding Sunday cars-and-coffee meetings on the streets of Winnetka and Barrington, Illinois.

“The first event had 25 cars, the second 54 and it just grew,” Hughes said. “We met great people who shared our same driving and mechanical passions,”

From those grassroots beginnings, the club has grown into a membership of more than 500 members and now offers a year-round schedule of drives, meets and social events for all sorts of collector vehicles. The club’s signature “Coffee and Classics” gathering has even spawned a satellite gathering event held monthly in Fort Lauderdale, Florida.

Fuelfed has reached out to classic motorcyclists with its newest event, the “MotorGearo 250,” to be held on June 3-4. The European-style road rally is open to 20 cars and 20 motorcycles, starting from the Swiss-themed boutique village of New Glarus and featuring eight stages through the bluff country of Southwest Wisconsin.

Even classic boats are appreciated by Fuelfed. The club’s “Water, Wood and Wheels Tour” on September 24th takes a scenic trip to Lake Geneva, Wisconsin, to take in the Geneva Lakes Antique and Classic Boat Show. All the Fuelfed events put a high emphasis on good food, craft beer and camaraderie with an egalitarian disregard for vehicle brands or values.

“Fuelfed was founded on the spirit of driving and mechanical connectivity and has built itself with members who believe this same ethos,” Hughes said. “It has always been about why we drive, not just what.”

Fuelfed has a paid system of annual memberships that varies depending on the driver’s involvement in club activities. For more information, visit the Fuelfed website.