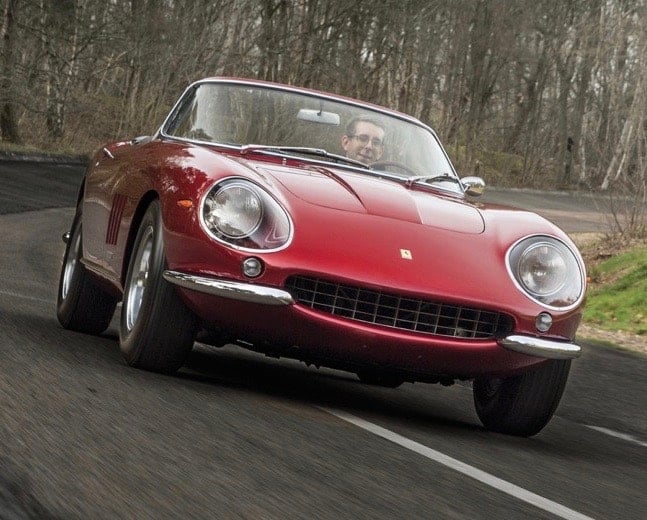 No. 11057 wasn’t only the 10th and therefore the last of the 1968 Ferrari 275 GTS/4 NART Spiders, it was the only example originally sold in Europe of the car like the one Steve McQueen drove in the original The Thomas Crown Affair.

As a result, RM Sotheby’s expects 11057 to be “one of the most valuable automobiles offered at auction in 2016” when it crosses the block at the auction house’s Monaco sale scheduled for May 14.

RM Sotheby’s expects the NART Spider, which also was the third-to-last of all the 275 models built, “to fetch in excess of €19 million,” according to the auction house news release. That number translates to $21.59 million.

NART Spider expected to bring around $22 million, or more

The release of the news about the NART Spider coincides with the release of the online catalog for the sale, which includes a Peugeot 908 Le Mans prototype racing car as well as a Porsche 911 GT1 Evolution. RM Sotheby’s previously announced that cars from Italy’s Quattroruote Collection will be offered at the sale held during the Grand Prix de Monaco Historique racing weekend.

“The 1968 275 GTS/4 NART Spider, chassis no. 11057, is unquestionably one of the most important road-going Ferraris in history, substantially rarer than virtually all of its iconic colleagues,” the auction house said in its news release.

“Only ten were ever built as part of an ingenious collaboration between American Ferrari importer extraordinaire Luigi Chinetti and Enzo Ferrari, bearing the race-winning moniker of Chinetti’s North American Racing Team.

“A fixture in the most glamorous, jet-setting locales around the world, the model itself also catapulted itself to instant automotive immortality as a result of its association with Steve McQueen.”

The example on offer wears a dark-red metallic finish with beige interior and is a Ferrari Classiche-certified numbers-matching example carrying a 330-horsepower V12 engine.

“It is a privilege to present this NART Spider, not only because of its importance and rarity, but also because its offering at auction is such an extraordinary event,” Rob Myers, chairman and chief executive of RM Sotheby’s, said in the news release. “Ownership of a NART Spider represents membership in a club of only nine other enthusiasts around the world. If a Ferrari is the choice of car connoisseurs, then the NART Spider is the choice of Ferrari connoisseurs.”

Joining the NART Spider in the sale are 20 other Ferraris, including:

And although not a Ferrari for the road, the sale also includes a 1990 Riva Ferrari 32, hull 28, an F1-inspired Ferrari Rosso Corsa red boat capable of reaching speeds in excess of 60 miles per hour.

Other highlights of the catalog are the Quattroruote Collection cars, which will be offered in a separate sale earlier in the day May 14, as well as: