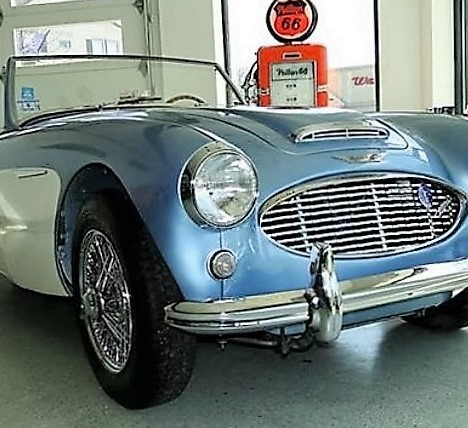 In the fast-moving collector car market, Big Healeys are yesterday’s news. After flying up in value as “flavor of the month” for a number of years, the popular British sports cars have settled in at a moderate price level, although pristine restored examples still break into six figures. Naturally, that doesn’t include rare racing models, which are in a different class altogether.

For the true Healey believers, the early years of the six-cylinder roadsters are the purest in character, such as the Pick of the Day, a 1959 Austin Healey 100-6 BN6.

The two-seater configuration – minus the practical but less-stylish rear jump seat – and the early design features of the original 100-4 are right on, but with the addition of an inline 6-cylinder engine that is smoother and more powerful than the original four banger.

While the later versions of the Big Healey breed, the 3000 BJ8, are the most valuable because of their increased power and sophistication, these first-generation cars seem to be more of the hairy-chested beasts that originator Donald Healey envisioned when he first mated a curvaceous roadster body with an Austin taxicab engine.

The 100-6 sports cars in less-than-perfect fettle are often relatively affordable. The asking price for this driver-quality 100-6 advertised on ClassicCars.com is a modest $29,900, for what the Beverly, Massachusetts, classic car dealer says is a good-running car in decent condition. That seems like a decent buy.

The Healey has acquired just over 66,000 miles on its odometer, the dealer notes, and has been owned for the past 30 years by a single family, which used it sparingly. An older lacquer repaint in correct Healey Blue with White coves is still holding up well, the listing says, and the interior and convertible top are in good shape.

The car features a wood steering wheel and chrome wire wheels, and the four-speed manual transmission is equipped with electric overdrive for relaxed driving at highway speeds.

The 100-6 seems like a car that you could drive and enjoy while gradually improving its overall condition, and the sub-$30,000 price tag leaves room for spending on the restoration.