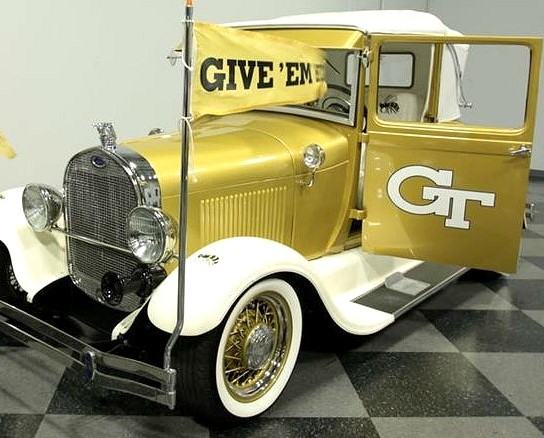 The Ford Model A Ramblin’ Wreck shows off its school spirit

The Georgia Institute of Technology has a bawdy fight song that is strange and colorful, and it dates back to the late 19th century. It later spawned an old-car tradition at the school that lives on today.

That was the inspiration for the Pick of the Day, a 1929 Ford Model A sport coupe customized to replicate the official white-and-gold Ramblin’ Wreck that is driven on the gridiron before Georgia Tech football games.

The Ford comes equipped with a rumble seat

“For most of you, this neat little 1929 Ford Model A sport coupe might be a little puzzling, but if you’re an alumni of Georgia Tech (hence the GT on the doors), then you know exactly what this is: a fantastic replica of the Ramblin’ Wreck,” says the listing on ClassicCars.com. “Full of tradition and ideal for the Georgia Tech fan heading off to homecoming, it’s a piece of history that you can drive.”

The seller is a classic car dealer appropriately located in Lithia, Georgia, who provides an extensive and informative description and history of the car (other ClassicCars.com sellers should take note how this dealer provides such interesting descriptions for all its listings).

The Yellow Jacket mascot is emblazoned on the spare tire

“This 1929 coupe isn’t an exact replica, but it’s pretty darned close. The gold-and-white paint scheme is correct and the sport coupe body style, complete with its cloth roof and landau irons, is exactly right. Finish quality is about right for a vehicle that’s going to get the vehicular equivalent of a bunch of high-fives at parades and other gatherings, and it looks pretty darned good.”

The Model A has been modified with a custom interior and a 2.8-liter V6 from a Chevy S10 pickup, hooked up with automatic transmission and a 9-inch Ford rear. Like the genuine article, the car is outfitted with flag poles at its front corners, and the seats have the school’s Yellow Jacket mascot embroidered on their backs.

The parade car has been driven “only 4,744 miles, so you know it hasn’t been abused,” the seller notes.

The asking price for this homage to Georgian college life is $29,995, which could be a lot or it could be a bargain. Who knows? As the seller notes, it would take a dedicated Georgia Tech fan to appreciate it.

“No, it’s not for everyone, we know that,” the dealer says. “But for a select few, this is a special vehicle that represents a ton of history and fun all in a well-sorted, tidy, and very affordable package.”