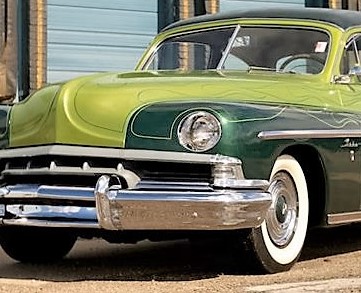 The most-famous creations by the late George Barris were wildly extravagant – the original Batmobile, the Munster Koach, Farrah Faucett’s mink-lined Corvette – so the Pick of the Day might seem fairly restrained.

The 1951 Lincoln Lido is a two-tone green custom coupe that was built by Barris and his leading painter, the late Roy “Tubs” Johnson, who owned the car for many years after it was finished, according to the St. Louis, Missouri, classic car dealer advertising the car.

“Roy was one of the original five men crew who helped George build the first 1966 Batmobile and was in charge of the painting aspects of the Batmobile project,” the dealer says in the listing on ClassicCars.com. “Roy stayed working with George all the way until his death in 1990; he was known for extremely high-quality paint jobs that could be performed in a very short amount of time.”

But not only did the Lido receive custom bodywork and paint by Barris, who died last year, and Johnson, the Lincoln reputedly was pinstriped by none other than iconic customizer Von Dutch, according to the car’s former owner.

According to the seller, the paint, chrome and trim are in excellent condition. The custom interior reflects the style and paint scheme of the body, with several George Barris touches including his signature and special badging.

“A custom George Barris logo green Lucite shift knob is located on the column shifter,” the seller notes. “Also included is a record of registration including the California “Pink” slip from Roy “Tubs” Johnson ownership and the Certificate of Authenticity signed by George Barris.”

The car is powered by its original 337 cid flathead V8 fed by a Holley two-barrel carburetor and attached to a four-speed Hydra-Matic automatic transmission.

The Lincoln Lido, as well as four other George Barris “kustom kars” were sold in January during Barrett-Jackson’s Scottsdale auction. The Lincoln was a steal at just $18,700, according to the Barrett-Jackson website.

Now, the dealer is asking a more-expected price of $49,900, which would buy a car with the custom imprint of George Barris, Tubs Johnson and Von Dutch. That still seems fairly reasonable, especially considering that the original Batmobile sold at Barrett-Jackson for $4.6 million.