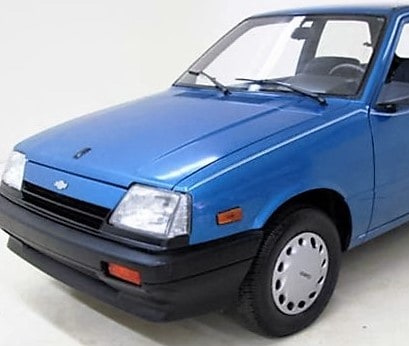 It is widely accepted that a sleeper car has various mods to make it a high performance vehicle while nothing on the exterior of the car would indicate that it was anything special.

Our Pick of the Days is a 1988 Chevrolet Sprint, an econo-box minicar that has been transformed into the ultimate sleeper car, retaining its unassuming stock exterior but packed with a shocking amount of muscle.

The Chevy Sprint, the result of an alliance between General Motors and Suzuki, was originally powered by a 1.0-liter, three-cylinder engine with optional turbo on some models. But not this one.

While the car might look like a stock Sprint, only the body is correct.  Under that mild exterior, a 402-cubic-inch, twin turbocharged aluminum small-block V8 has been crammed under its hood, professionally constructed by Fatman Fabrications of Charlotte, North Carolina.

According to the listing on ClassicCars.com from a dealer in Concord, North Carolina, only the best components were used for the engine build by Kenny Duttweiler, including Brodix block and heads, Comp roller-cam, forged crank/rods, CP pistons, twin Precision Turbos and Big Stuff3 EFI.

The result is an engine that dynos at 954 horsepower on pump gas, the seller says. If the engine is fed racing gas, or pump gas mixed with methanol injection, it puts out 1,332 horsepower, according to a Hot Rod magazine article about this car.

Fatman fabricated a square-tube frame incorporated with the Sprint’s stock unibody, and added Macpherson strut front suspension and Nissan truck brakes. The differential is a narrowed Ford 9-inch with Detroit Truetrac and 2:50:1 gearing, and the transmission is a GM TH350.

The listing states that every aspect of the build has been fully documented and that this one-off drag-strip monster is also street legal.

“This little Chevrolet needs to be seen to be truly appreciated,” the dealer says.  “It is an engineering marvel.”

The one-of-a-kind Sprint is offered for $44,995 for an extreme sleeper that should produce lots of stoplight surprises.