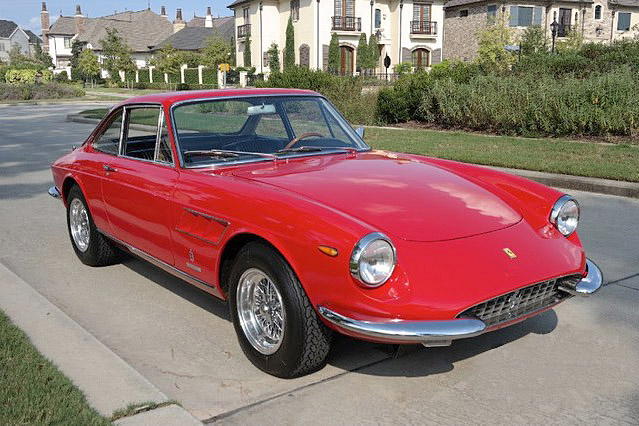 Editor’s note: This is the final in a 10-day series featuring cars to be sold April 8-10 at Barrett-Jackson’s 2016 Palm Beach Auction.

Introduced at the 1966 Geneva Motor Show, the Ferrari 330 GTC filled the gap between the sporting 275 GTB and the more luxurious 330 GT 2+2. The 330 GTC merged a number of desirable aspects from other Ferraris of the time and was molded into a very well-rounded automobile.

The car utilized the same suspension, steering and transmission as the 275 GTB and the 4.0-liter V12 from the 330 GT 2+2. Without a set of rear seats, the 330 GTC was able to fit additional luggage in the cabin, thanks to a parcel shelf.

Front of the Ferrari

The car’s wheelbase was reduced by 10 inches, which greatly improved its handling dynamics. Pininfarina also attempted to combine the best aspects of its work on previous Ferraris to create a car that was instantly recognizable as a Ferrari, yet unique.

The 330 GTC’s tail was first seen on the 275 GTS, while the car’s nose was similar in design to the limited-production Series II 500 Superfast. Pininfarina also utilized A- and B-pillars, allowing for better visibility for the driver and giving the cabin a very airy feeling.

By the time production ceased in 1968, only 598 examples had been produced.

Crossing the block with a reserve at Barrett-Jacksons Palm Beach auction is this 1968 Ferrari 330 GTC.

With matching-numbers, this Ferrari, Chassis 11427, is outfitted with optional factory air conditioning and was recently serviced and mechanically refurbished. It has a 94.5-inch wheelbase and features a 300-horsepower V12 engine with three Weber 40 DCZ6 carburetors, 5-speed manual transmission, front and rear independent suspension via wishbones, coil springs, and telescopic shock absorbers and four-wheel hydraulic disc brakes.

The car was built in 1968 and was finished in Amarant over a Nero Franzi interior. It remained in its native country with its first owner, Clemento Ravetto, who took delivery in September 1968, according to noted Ferrari historian Marcel Massini.

Interior of the Ferrari

During his ownership, Ravetto had his 330 GTC serviced and maintained by Ferrari Assistenza Clienti in Modena on at least three separate occasions before he sold the car to its second owner in Treviso, Italy. From there it was exported to the United States in 1972.

The car returned to Europe in the 1980s and, following a repaint in red, was purchased by a Ferrari collector in Switzerland and stayed in his private collection for over 30 years.

Following its recent purchase, chassis 11427 was shipped directly to RM Auto Restoration in Ontario, Canada, for a full service and mechanical refurbishment. The carburetors were rebuilt; the air conditioning, heater, and brakes were serviced; new rear shocks and new tailpipes were fitted; the fuel pump was rebuilt and four new Michelin tires were fitted. The engine was also fully serviced, the heads were removed and reconditioned, the water pump was rebuilt and new oil filters were installed.