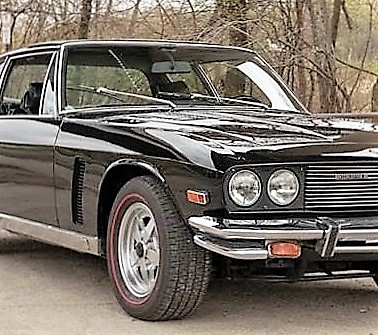 Say you can’t afford a classic Aston Martin but you still want the classic Aston driving experience. Well, you could do a lot worse than a Jensen Interceptor.

The Pick of the Day is a 1976 Jensen Interceptor coupe that should fit the bill.

I owned one of these cars and really enjoyed it. I also previously owned a 1969 Aston Martin DBS, and I think the experience behind the wheel is essentially the same. The Jensen is actually faster due to its huge Chrysler 440 cid engine, as well as being cheaper to buy and cheaper to keep running.

The Jensen was designed to be a head-to-head competitor with the more expensive Aston. The Interceptor has all that the Aston has, being hand built in England with a luxurious interior and plenty of power from the mammoth V8.

Designed by Carrozzeria Touring of Italy, these cars were very expensive when new and were one of the “it” cars of the era, owned by such notables as Indy 500 winner Johnny Rutherford, Frank Sinatra, author Frederick Forsythe, Bing Crosby, F1 Champion Jackie Stewart, Cliff Richard and actor Tony Curtis (who was the previous owner of my own Interceptor).

According to the St. Louis, Missouri, dealer listing this Interceptor on ClassicCars.com, this is one of only 171 Interceptors built during its final year of production.

The gloss-black paint on this coupe shows well, the dealer says, and all the aluminum trim is present, complete and displays well with normal wear. The dealer also notes that the original front and rear bumpers fit well and that the chrome is great, and all the rubber weather-stripping remains pliable and performs its intended function. The original 15-inch wheels show well with only slight signs of marring, the dealer adds.

The interior looks just as good, the dealer says, with black-leather seats with matching black door panels, carpet and dashboard. The seller notes that this car is one of 100 examples equipped with a dealer-installed sliding sunroof.  The gauges have correct appearance and function as originally designed, along with the heater and air conditioning, according to the listing. The same goes for the power seats, power windows and Motorola AM/FM 8-track.

The original, ugly steering wheel has been replaced with a period-correct Moto-Lita three-spoke leather-wrapped wheel, although the ad notes that the horn is inoperable.  Current mileage on the odometer shows 57,003, according to the dealer.

I went to the dealer’s website after seeing the ad, and there are scores of pictures detailing every part of this car, which appears to be solid with no lurking problems.

The asking price of this nice, low-mileage Interceptor is a market correct $39,900. If you have followed the Interceptor over the past few years, you know that these cars have increased in value.

So if you fancy yourself a James Bond on a budget, the stunning Interceptor is one of the best embodiments of the British Gentleman’s Express ever built.