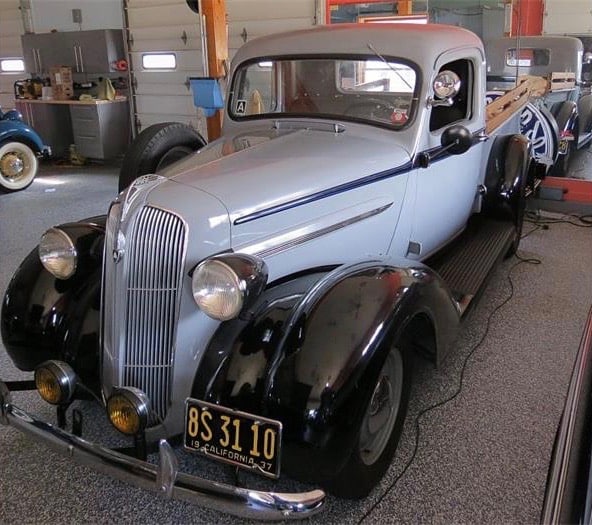 That isn’t a misprint. You read it correctly. The pick of the day is, indeed, a Plymouth pickup truck, specifically, a 1937 Plymouth PT-50.

Plymouth produced what were considered commercial vehicles from 1935 to 1942, and launched the Trial Duster in 1974, either as an enclosed sport utility or open-bed pickup.

Plymouth dealerships often with paired with Dodge stores, and thus had Dodge trucks available to sell, but some were linked to DeSoto or Chrysler outlets and thus the need for a Plymouth-badged truck line. At first, the Plymouth commercial sedans were delivery vehicles and taxi cabs or wood-paneled Suburbans, but in 1937 there was the PT-50 pickup, though officially it was called a commercial car.

PT-50s were built in Michigan, Indiana and California. Of some 14,700 Plymouth commercial cars built in 1937, about 10,700 were PT50s. The others were station wagons, sedan deliveries or were sold as chassis with cab.

The one being advertised on ClassicCars.com was discovered at a Catholic boys school in California and purchased by the seller from the second owner, who had the Plymouth pickup for more than 30 years.

The truck may be old but has been driven less than 17,500 miles since new, the seller reports.

“It is spotless rust free,” the advertisement proclaims. “The second owner had the truck repainted again with the original color and addressed every detail to make this truck 100 percent for everyday driving.

The engine is a 190-cid flat 6 linked to a manual gearbox.

However, the interior, the wiring, brakes, carburetor, radiator, chrome and tires are new.

“This old Plymouth truck is very rare to find with no modifications with its original drivetrain,” the seller notes. “A real show piece in real life and a real joy to drive.”

“Runs and drive’s great! You will not be disappointed!”

Well, you may be disappointed by one thing — the 1937 license plates are not included in the sale.

The truck is located in Templeton, Massachusetts. The asking price is $38,500 or best offer.